All the action went down at CBC's Q radio show 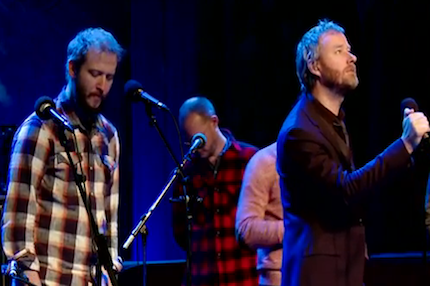 The National are putting 2010’s High Violet to bed in high style. Beginning December 12, Brooklyn’s reigning kings of moody, baritone-sung rock anthems will wrap up their current tour with a sold-out, six-night stand at New York’s Beacon Theatre. But first, they stopped by the CBC’s Q radio show, where they performed with Bon Iver’s Justin Vernon and premiered two previously unreleased songs. Check them out below.

As the National look ahead to their upcoming sixth album, the group’s new material is “less cerebral and academic and much more immediate and visceral than usual,” singer Matt Berninger is quoted as saying in a recent interview with London Free Press. Both of the new songs the band played for the CBC maintain a dusky, somber quality, but the brooding, acoustic-based”I Need My Girl” repeats a simple, easy-to-relate-with refrain (“I need my girl,” of course), while the rattling, piano-supported “Rylan” offers timely observations about “popular culture” and the kids who “are high and hazy.” Listen here, or just scroll down (via Twenty Four Bit).