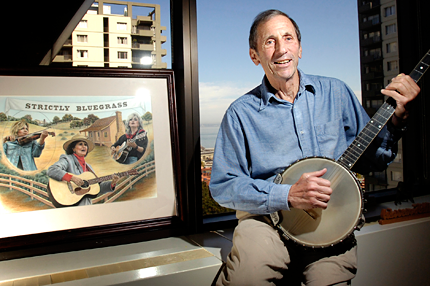 Billionaire financier, philanthropist, and music lover Warren Hellman, who also helped jump-start San Francisco’s annual Hardly Strictly Bluegrass Festival, passed away on December 18 following complications from leukemia treatment at age 77. The banjo-playing Hellman was a well-known and well-loved figure in the Bay Area’s bluegrass circuit who made crucial investments in local venues like Slims and the Great American Music Hall. His band the Wronglers frequently performed at the fest Hellman himself helped establish — the Bay Citizen reports that Hellman postponed chemo treatments to perform at this year’s fest — and he also toured with country singer Jimmie Dale Gilmore. An impressive musical résmé for an equity firm owner and former Lehman Brothers president.

“I first met Warren through our mutual love of bluegrass music and came to realize over the years what a special person he was,” Emmylou Harris told the Bay Citizen. “He gave so much of himself to so many and we are all the richer for it. I’m blessed to have known him and call him my friend.” House Minority Leader Nancy Pelosi added, “Warren Hellman was a community leader, a San Francisco legend, and an American success story. Warren’s business acumen allowed him to pursue his true passion: philanthropy. His deep generosity, intellectual curiosity, and visionary dynamism changed the face of our city.” In memory of Hellman, the area the Hardly Strictly Bluegrass Festival occupies in San Fran’s Golden Gate Park will be renamed “Hellman Hollow.”

A memorial service for Hellman will take place today in San Francisco at 4 p.m. ET. You can watch a webcast live here via a feed posted at the Hardly Strictly Bluegrass site. Despite losing their biggest benefactor, organizers pledge that the fest will continue on next year, booking October 5-7 at Hellman Hollow for 2012’s festival.