Director David Lynch is the reigning master of the uneasy dream, the enigmatic detail, the nook where atmosphere ultimately becomes the story. For the first time ever, he’s bringing this to the album format with his debut, Crazy Clown Time, a naturally smoke-obscured wash of Badalamenti moods, Mobycentric pulse, and mutant rockabilly. Lynch plays narrator, taking us down alleys via vocoder burble, distended Residents hick-honk or fuzz-fucked whisper. SPIN talked with this living legend about the stage fright that fuels his cloaked vocals and get a Agent Dale Cooper-style lecture importance of daydreaming.

Before you started tracking this album, where were you doing your most singing? Did you sing in the shower? Do karaoke?
I was not ever singing, Chris. I guess the song “Ghost of Love” was the first time I sang like this on a song, and that was not that long ago. I never wanted to sing. I never thought I’d ever sing. I work with Big Dean Hurley, who is the engineer in the studio, and he can put so much stuff on my voice that I really don’t feel it’s me anymore.

So when you sing in the studio, you sing with the effects on?
Yeah.

Do you feel like you’re playing a character?
Yeah. A lot of times… You dial in a certain sound and you hear it in your phones. It’s not you, and a character is born depending on the sound. And it’s really fascinating. That character is going to sing a certain way and phrase things a certain way, and it’s gonna have a certain feel to it, and it’s beautiful when that happens and it marries to the music. 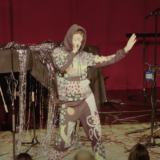 When you tell these stories can you visualize the characters?
Yes, I can see.

Like what does Pinky look like from “Pinky’s Dream”?
It’s interesting that you ask that. I’ve never seen Pinky. But I know that Pinky is not a big fellow. And when you see him you have compassion for him. The way [the album’s lone guest vocalist] Karen O sings the word “Pinky” is so incredibly perfect and beautiful to me. The way she says Pinky really brought him to life. But I don’t know who could play Pinky. I could try to cast it. You know, you could see a lot of people and one of them could be Pinky. But I wouldn’t know exactly where to start.

Will you be somewhere and imagine a scene and think, “I have to turn that into a song?”
In a way, you don’t really have to be anywhere. You can be there mentally. And you’ll get an idea, daydreaming. And I always say ideas are the main thing.

Where do you do most of your daydreaming?
Different places. I have different places where I go and I can sit and think. Where I am now, in my painting studio, it’s half inside and half outside. It’s basically outside, but I’m in kind of a glass room that is as cold or as warm as it is outside. And it’s real beautiful light today. It’s pretty comfortable to be here, but it’s not comfortable when it’s cold. I like to sit here, for sure, and daydream.

Do you see daydreaming as part of your work day?
Oh, for sure [laughs]. Catching ideas. But it doesn’t always happen in a daydream. It can happen in anything. Anything can trigger an idea. But I really think, and it’s hard when you have a lot of things going on and there’s people around. It’s hard to find that time where you can sink into daydreaming. But it’s really important for all human beings to sit and see what comes into the mind.

You’ve built your whole career mainly being behind the scenes. This record requires you to perform.
In a very protected environment. The only person I sing in front of is Dean. And that isn’t always comfortable, but it’s gotten more comfortable.

Did you ever have to tell him to look away?
Look away? He doesn’t really look at me. He’s looking at the machine. He can see me, but sometimes my back is turned to him or I’m in place that he can’t really see me.

And you’re not planning on doing any of this live?
No, no, no. You know, Dean is always thinking that it could be possible, but I think, you know, in kind of a dream world it’s possible, but in so-called reality… I think that’s why heavy drugs are so popular. You’d have to alter a lot of the fear mechanism.

So you have a little bit of stage fright?
Very much. Very much.

You acted a little bit in Twin Peaks. Was that a similar situation for you?
It’s the kind of thing, I don’t know, I look at it like the mountains and the valleys of a sine wave. This person I know is in the dressing room and there are certain parts of that sine wave if it’s rising to the peak he could go out on the stage right then, but if that moment passes and, let’s say they’re calling him to the stage and he’s going down into the valley, it would be suicide to go out. I think it’s catching the peak part of those sine waves. If you can catch that, you can do it. In the valley, you die the death.

Do you even feel that when you’re speaking on panels?
Any time in front of a large audience or things like that, there’s big fear. You know, I’ve gone around talking about meditation. In the beginning the fear was thick. Over the years I’ve gotten more used to it. So it’s easier, but it’s not easy.

There’s definitely a mutated rockabilly feel of the album. How did that music first affect you as a kid?
Like being hit with a truck filled with happiness [laughs]. It was a thrilling truck, and you know, I sort of wish everybody could experience that feeling. You’ve heard these stories. So many musicians when they saw Elvis for the first time, they just slammed their head with their first and just sad, “Damn! This is it!” And it was just suddenly so obvious. It wasn’t there, and then it was there. And it had this unbelievable power, and it just screamed out, and everybody and his little brother lit up like a Christmas tree. It was unbelievably beautiful. I just, inside, felt this thrill, this love of the sound. It was like grabbing onto an electric wire.

Blue Velvet came out in the wake of things like Happy Days and American Graffiti, and people painting the ’50s and early ’60s as this very nice and shiny time. And the way you used older music really flipped that on it’s ear.
You know, ’50s music held a happiness for sure, but you know Elvis also sings “Heartbreak Hotel,” and there’s a kind of sweet sadness, and that dream thing that could go either way. The ’50s dream, like the Fleetwoods “Come Softly to Me,” was real popular. And all the great ones there, they caught this thing. In every decade the music paints the mood. So if you listen to what was popular in the ’50s, from ’56 on, maybe, and it’s a summer night and you’re listening to this or you’re slowdancing in a basement with a girl, you can go back to that time.

Do people hand you records by other artists and describe them as “Lynchian?”
No. [Laughs] That hasn’t happened to me.