An Oral History of Naughty By Nature’s ‘O.P.P.’

In the 1990s, “You down with O.P.P.?” was as omnipresent as “Just Do It” — and was about as unsubtle. To the world it seemed like this East Orange, New Jersey trio appeared from nowhere, but Naughty By Nature were actually on their second chance. MCs Treach and Vin Rock alongside DJ Kay Gee spent the late ’80s sporting high-top fades and sweaters as the New Style, but, under the tutelage of Queen Latifah, they had rebranded themselves as the grittier Naughty, whose songs like “Everything’s Gonna Be Alright (Ghetto Bastard)” maintained an journalistic eye and literary heart. They were best at matching rough subject matter with buoyant pop aspirations, which spawned not only Treach’s role as ’90s sex symbol, but the national sensation “O.P.P.”

“O.P.P.” broke the Video Music Box, spawned the MTV tribute advertisement “Down With MTV,” hit Top 10 on the Billboard Hot 100, garnered the group a platinum record and was a critical smash to boot: SPIN called it one of the 20 greatest singles of the 1990s, writing simply, “Ever wonder where Puffy came from?” Since then it’s been in a half dozen movies, a few video games and countless wedding receptions where you’d think a song about infidelity wouldn’t be rewarded with cheers. Naughty recently reunited for their perfectly titled sixth album, Anthem Inc., which includes a re-recorded version of “O.P.P.” that maintains the same energy as the original (with none of those costly samples). “That was the baby,” says MC Vin Rock of the track. “It gave birth to Naughty by Nature the brand. Twenty years later, man, it’s one of the main reasons why promoters book us and fans want to see it. So it’s the gift that keeps on giving. It’s one of those songs that apparently will never die.”

Where did the phrase “O.P.P.” come from?
Vin Rock: Our buddy Mo Brown would come around the block and say he was down with O.P.M., meaning “Other People’s Money.” We decided to flip that to “O.P.P.,” ’cause I had a high school sweetheart who kind of cheated on me with another guy, but eventually she still liked me.

Whatever happened to that girl?
Vin Rock: Well, she’s still around. Actually, she’s the president of our class of ’88 reunion. We just had like a 20th anniversary of the class of ’88 a few years ago, and she was there. We’re still friends. 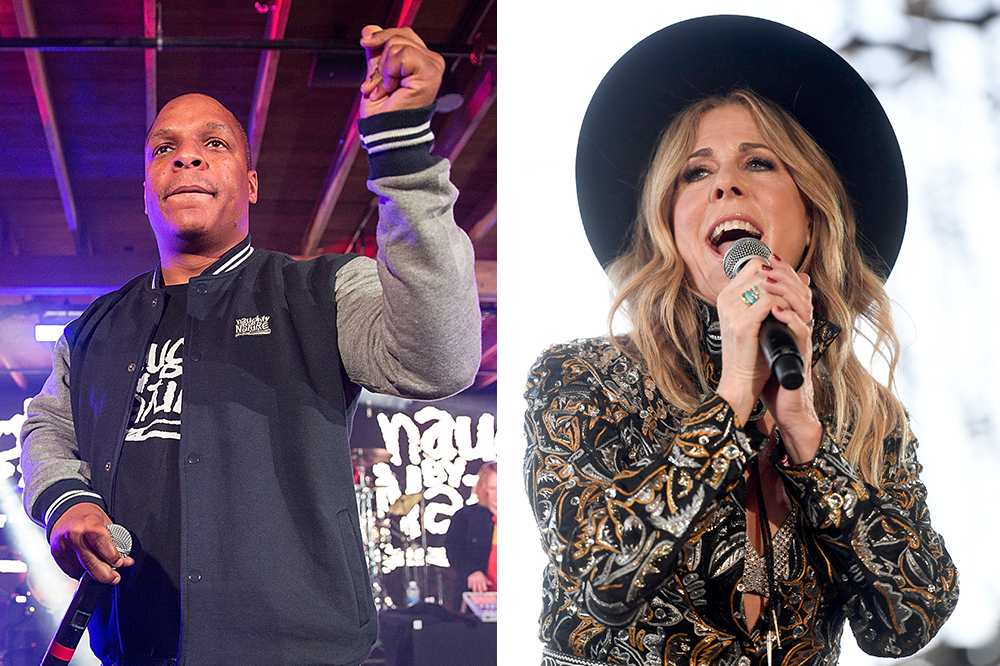 How did you make the beat?
Kay Gee: That record was done and finished in 1989. I didn’t have equipment yet, just a few tape recorders in the studio. Marion Recording had a studio below named David Bellochio Studio. He had an old PC, which was fresh at the time, and we’d just loop everything up there in his system. He had an S-900 sampler in his studio. I took the Michael Jackson record [“ABC” by the Jackson 5] over there and hooked it up. It was crazy back in that day when you took an album and hooked it up, it only played in mono, so you’d only hear certain things. You don’t even hear all the vocals on the song. I ended up looping that up in there, then taking a tape home. Treach was just sitting in my room, on my little bunk bed, and he was just sitting there writing and messing around with it. He just sat there in the room, that hot room in the summertime, and he just sat there and wrote the song.

What inspired you to sample “ABC”?
Kay Gee: Growing up, that was one of the family’s favorites. My parents are from South Carolina, so we took those long rides down there and that stuff would be playing on the 8-track and on the radio all the way down. My father would be singing along. And that’s how we became familiar with those records. Marvin Gaye, Teddy Pendergrass, Jackson 5, all that stuff. It was just embedded into us at an early age. Jackson 5 just happened to be one of the records I had in the crate that day in the studio, and it just worked. I had Dave play the bassline live, threw the sample out, played it live and just add some pianos on it. That’s where Treach’s line “Dave, drop a load on ’em” came into play. He’s the only white guy in the video.

Did you know when you were putting it together that that would be a single? Or did it just happen?
Vin Rock: It just kind of happened. We approached Queen Latifah and Shakim [Compere] in the Flavor Unit with a 30-, 40-song demo. Shit, we thought all the records were hot. Once we decided that “O.P.P.” would be the single we put “Wickedest Man Alive,” featuring Queen Latifah, on the B-side. When we first sent those singles out, most radiocasters and DJs were playing “Wickedest Man Alive.” They weren’t even really playing “O.P.P.” Once we did the video it helped connect the dots.
Kay Gee: Monica Lynch [at Tommy Boy] is a marketing genius, and she’s totally, totally, if not solely responsible for branding Naughty by Nature. You know that logo? She got Mark Weinberg to draw that logo for us. And that logo he drew at dinner on a napkin with a crayon, that’s why it’s all ridged. That’s why the original logo has those ridges on it, that’s from him pushing down on the crayon and the crayon breaking off.

What was it like making that video?
Vin Rock: We got to shoot around our hometown of East Orange, New Jersey. We went out to Route 109 where everyone would take their little jump-offs and their little sidepiece, to all those little motels out there, and do what they do with them. So we kinda got to expose the strip of where you take your O.P.P., you know what I mean?

So the hotels in the “O.P.P” video were the real hotels where people in your neighborhood would go for action?
Vin Rock: Exactly. They definitely would. It was a little ho stroll around then so cats would go down the 109, truck drivers would post up in those hotels and then, you know, the ladies of the night would be available. So everybody played that strip, and we kinda put it on blast. We were shooting reality TV in ’91 [laughs].

The most memorable scene in that video is you putting the sticker on that girl’s rear end…
Treach: Exaaactly. Nice. And Naughty.

Do you remember who that girl was?
Treach: I don’t even remember. We just picked out the nicest one that we seen out there at the time.

Do you remember that scene with the girls rubbing their hands all over you?
Treach: Aw yeah, I was waiting for that one all day. I was like, “Why can’t we shoot the one I want to shoot?” I need to get that hand action.

How did you first know the song was a hit?
Vin Rock: Well, we knew we had a hit when we did our first guest appearance with De La Soul. De La was doing a 20,000-seat arena, and we were doing promos trying to get record stores to like the cassette. They let us come out and do “O.P.P.” And then the whole arena went wild, soon as we dropped the song.
Kay Gee: Once we got back home it was really going on. The video started playing just after that, it got that crazy run on Video Jukebox. You could call up and order it and it would come on back to back to back to back to back. It would just come on and keep coming on.
Treach: They had to switch up the rules and get some kind of order. Other than that you’d just turn on Video Jukebox and just hear us. We went to a mall one day after being off on the road for a while, not seeing any of the videos because we’d been in hotels. We hit that mall and got chased out by all the fans. That’s when I said “You know what? This might be serious.”
Kay Gee: We had this mall going crazy. We almost shut down the whole town of Toronto.
Treach: When we started playing it overseas. It was like “Yo. These people know this all over the world.” We called it passport pimpin’… We had to reassess everything. You couldn’t just go outside no more and not be noticed. You didn’t know if somebody was coming to jack you or if somebody was coming to say what’s up. You had to get out of the street mentality and put the artist mentality on.

The track has been used in a lot of movies and TV shows. Do you have a favorite example of hearing the song in another context?
Vin Rock: My favorite use is Jarhead, you know with Jake Gyllenhaal and Jamie Foxx and them? It’s an army movie and a period piece set in the ’90s, and when these guys were out there in Iraq, fighting for their lives. To have our record playing and have it connect with that time period really brought home how important that record was for the soldiers out there.

You’ve heard stories about people going to Iraq and playing your song?
Vin Rock: Definitely. Also, there’s a book out [A Long Way Gone: Memoirs of a Boy Soldier by Ishmael Beah] with these African kids, and there’s this one particular kid who was leaving his country as they were warring. He had become a refugee, so he’s just wandering in Africa, leaving his country, and all he had was his raggedy little cassette player and the “O.P.P.” song. That’s what he was using to get by, and to hype himself up to just keep moving forward.

Did you hear the song in DJ Hero?
Vin Rock: No, I’m not the biggest video game guy. I realized it was in there, because I have to sign off on all that [laughs].

You just released a new version of “O.P.P.” What was it like going back in and redoing it?
Vin Rock: We were amateurs and Kay Gee was an amateur producer. So Kay and I always talk when we listen to our older records and he’s like, “Man, I can’t believe I was that wack! If I had a chance, I’d strip the samples with my production team, have my musicians play all those elements over. Give them harder kicks, harder snares. It would be cleaner and more crisp.” And that’s basically what we did.
Kay Gee: I have a new group I’m working on called Elite, and I had these young guys sing the Michael Jackson stuff. You know, a lot of people do their classics over and they don’t sound the same. This one really sounds actually exactly the same.
Treach: When we perform we want to sound just like the record. So even when we’re jumping around and getting it in, we still gotta sound like the record. We perform it 100, 150 times a year for 20 years. It wasn’t tough to remaster it. We’ve had some practice. Thoroughly.

Do you ever get tired of playing it?
Vin Rock: No, absolutely not. Twenty years later, most of our peers, most of them are soccer moms and dads, so they’re not out at the arenas. It’s the younger kids out there and these kids are discovering “O.P.P.” for the first time. We’re performing and promoting and selling this song for a brand new audience, for the very first time. That never, ever gets boring.