The National Jam With Trey Anastasio at New York Gig 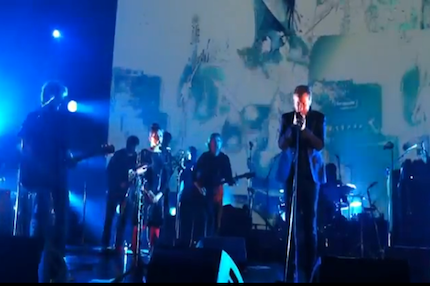 Earlier this month, SPIN told you that Phish frontman Trey Anastasio is quietly working on a new solo album with members of the National and their producer Peter Katis. Now that his secret is out, the guitarist hit the stage with his new buddies this weekend, joining the band during its six-show residency at the Beacon Theatre Friday night. According to Brooklyn Vegan, Anastasio performed on three High Violet tracks — “Bloodbuzz Ohio,” “Terrible Love,” and a sing-along of “Vanderlyle Crybaby Geeks” — plus “Murder Me Rachael” and Boxer’s “Squalor Victoria.”

When Anastasio first appeared onstage, the National introduced him as “a hero of ours,” Jambands.com reports. While the collaboration between the Vermont noodler and the Ohio-based indie rockers still seems strange on paper, most members of the National are diehard Phish and Grateful Dead fans. We say “most members” because singer Matt Berninger doesn’t dig the jam scene — the first time he attended a Phish show, he “listened to one song and then went and hid in the car,” the National’s Bryce Dessner told Jambands in 2009. “Matt can still not understand at all how any of us can stomach Phish but pretty much everyone else in the band grew up on their music,” Dessner added. Despite not being a Phan, Berninger exclaimed, “That’s the sound of faces melting,” after Anastasio’s National performance.

Arcade Fire’s Richard Reed Parry and opener My Brightest Diamond also guested during the National’s concert. Anyone who missed Anastasio at the Beacon can huddle in the freezing cold outside Madison Square Garden while reciting “Anyone got one?” from December 28 to 31, when Phish invade the arena for their sold-out New Year’s shows. Those gigs are usually all-star affairs, so it’s possible that the National might stop by to return the favor.

Enjoy this shaky cellphone video of Trey performing with the National. That’s a pretty Phishy solo he busts out on “Bloodbuzz Ohio”: