'We can do all kinds of stuff that we've only dreamed about,' Vince Neil says 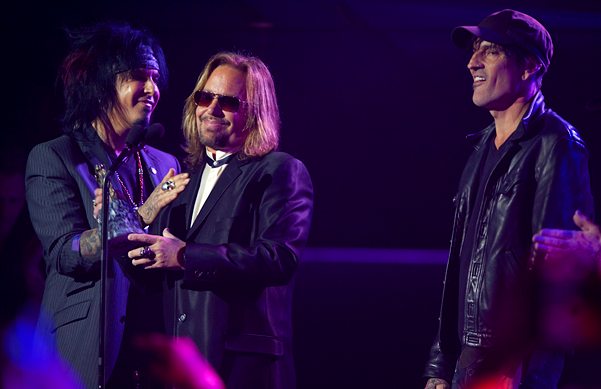 Sunset Strip hair metal pioneers Mötley Crüe are taking their melodic anthems and animated theatrics off the road for three weeks and into the Joint at the Hard Rock Hotel and Casino in Las Vegas. From February 3 to 19 the band will play four shows a week there, becoming the first metal band to do a Vegas residency. (Artists who have previously set up shop in Sin City include Celine Dion and Bette Midler.)

“[We’re] putting something together that we’ve never done before,” vocalist Vince Neil said in a press teleconference Wednesday afternoon. “Since it’s a stationary show, and doesn’t have to move around, we can do all kinds of stuff that we’ve only dreamed about.”

Without revealing many details, the Crüe stressed that the show, which they’re calling “Mötley Crüe in Sin City,” will not be a traditional rock concert. There will be no opener, the band members will play from various positions in the theater and the production will feature non-musical performers, possibly including actors, acrobats and partially or fully nude dancers. “It would be great to do things you couldn’t do in a normal arena in Ohio,” drummer Tommy Lee said. “I mean, it’s Vegas, right? That’s why we signed up for this shit.”

“There’s going to be stuff around the venue that’s going to come up behind you and to the side of you and above you and then below you,” added Neil, who lives in Vegas and looks forward to the opportunity to drive to work every day (perhaps forgetting about that pesky DUI he got last summer). “There’ll be no person sitting up in the very back. Those seats won’t exist because these people will still be encompassed in the show.”

In addition to plugging the immersive elements of the show, Neil and Lee expressed pride in being the first rockers to play Vegas Cirque Du Soleil-style, and said they hope their residency provides opportunities for other bands down the road. “It really opens the doors for casino owners and managers to say, ‘Wow, this really works,’ ” Neil said. “And they can get in some other way cool bands [to] start doing residencies also.”

Rehearsals will start in mid-January, and while “Freaks” is scheduled to last three weeks, if it’s successful the Crüe will consider extending the run. Ticket prices are currently unknown, but Neil joked they’ll be “really expensive,” and stated that the band will be selling plenty of merch in the theater, including the expanded 10th anniversary edition of their autobiography “The Dirt.” Though he added, “If [theatergoers] are reading books during intermission, then we’ve failed miserably.”