Matt and Kim Get Their Own Special Edition Converse

Limited release shoes due December 9 in New York and Boston 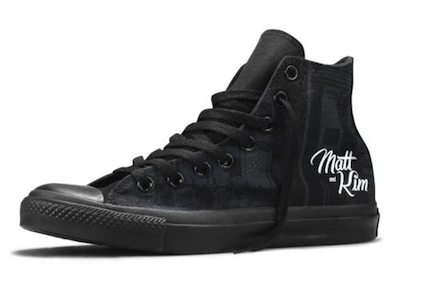 Fans of Brooklyn pop duo Matt and Kim will soon be able to pick up a pair of Converse sneakers with the band’s name emblazoned on the side. The company sent a tweet today announcing the blue-and-black limited-edition shoes will be up for grabs at stores in New York City and Boston starting December 9. However, each location will only stock 50 pairs. Prepare to brawl, Matt and Kim fans!

No word on a price tag or whether the indie poppers had a hand in the design, but more information is expected on Thursday. A month ago Converse announced plans to team with Gorillaz to release a line of shoes in February 2012. Jamie Hewlett, the animated hip-hop group’s co-founder, helped create the four different styles of Chuck Taylor All Stars. That collaboration will also feature a song as part of Converse’s “Three Artists. One Song” series.

Matt and Kim have already contributed to one of Converse’s free songs along with Soulja Boy and Andrew WK. “I’m a Goner” is available for free download over at the Converse website, along with a comically gruesome video set in a morgue.

Matt and Kim ‘Get It’ on ‘Jimmy Kimmel Live’