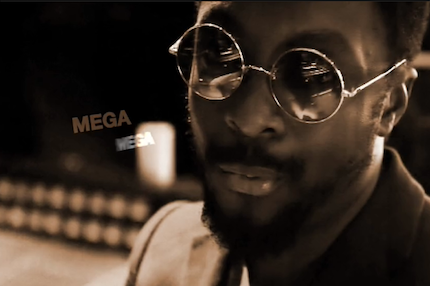 There’s the old adage, “Don’t bite the hand that feeds you,” but “Megaupload Mega Song” is more like “Shaking the hand that steals from you.” Kanye West, Diddy, Will.i.am, Alicia Keys, and many more people who depend on the music industry to make a living have all participated in this “We Are the World”-esque tribute to Megaupload, one of the most popular sites people use to illegally download albums by all those talented people. This song and its corresponding video are like the equivalent of Metallica taking Napster out for a nice sushi dinner and then giving it a foot massage.

All these celebrities were probably well paid using the money the site gets from all those suckers who actually pay for “Premium” membership. In fact, pictures of Alicia Keys and Kim Kardashian feature on the Megaupload site (where you’ll have to hear this song, because YouTubes are vanishing quickly). If this is one big Funny or Die scam, then it’s incredibly well done. If not, all these artists are probably going to be fielding some unpleasant phone calls from the label reps any second now. “I love Megaupload because it moves fast, just like I like it,” exclaims Ciara, whose last album Basic Instinct debuted with a whopping 44,000 copies and a No. 44 entrance on the Billboard 200 in 2010.

Yes, the song sucks, but the statement is resounding: Musicians, those most affected by illegal downloading destinations like Megaupload, use the site to pirate one another’s music. Maybe this is also a case of biting the hand that feeds you, since the major labels and the RIAA — both of whom have been fighting Megaupload and its doppelgangers for years — are probably really pissed right now. All we need now is an indie rock tribute to Rapidshare and an all-star hip-hop ode to Mediafire and the music industry will set itself on fire.