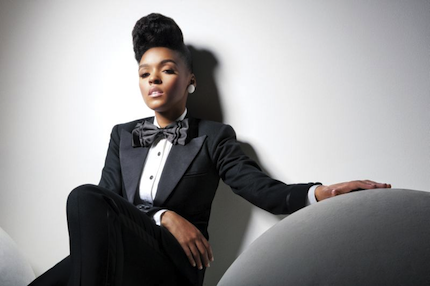 Every sci-fi funkateer starts somewhere, and for Janelle Monáe Robinson, that place is Kansas City, Kansas. Though the well-coiffed R&B eccentric decamped for Atlanta well before with last year’s extraordinary The Archandroid, she came back home last week, where she revealed plans to release not one, but two proper albums in 2012.

Monáe reportedly unveiled her intentions in an interview with the blog Back to Rockville (via ONTD) before appearing at a mayoral Christmas tree lighting ceremony on Friday night. “I am happy to be here and see my family, and I am eager to get back to the studio and work on finishing my album,” she’s quoted as saying. “I stopped touring so I could finish the album. Actually, I plan on releasing two albums next year.”

While Monáe was hesitant to go into other details, including release dates, she reportedly said that “84.799 percent of the writing is done” for the new records. “I will release them according to my soul clock,” she’s quoted as saying. “But I will try to stick the scheduled release dates, which I know but can’t say.”

Monáe also unveiled plans to tour next year, according to ONTD. “I’ll be with some really big artists,” she’s quoted as saying, promising a three-night stand at the Staples Center in Los Angeles. A cross-genre concert billing wouldn’t seem out of the question, giving her recent collaboration with Fueled By Ramen-singed group fun. on an acoustic version of their “We Are Young”; watch it below.