I Was There: Snapshots From the War on Drugs’ Personal Tour Album 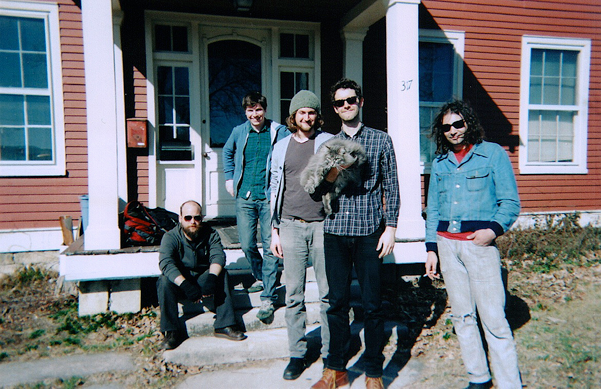 Last week, Philly rockers the War on Drugs hit the road for their final ten shows of 2011 supporting their excellent disc Slave Ambient, wrapping what's been a jam-packed year spent battling snowstorms and befriending drunk dudes on tour. Bassist Dave Hartley captured all the action as the group traveled from Indiana to Amsterdam and kindly shared his photos with SPIN:

The War on Drugs in Bloomington, Indiana, home of Secretly Canadian (our record label). I'm holding Eric Dienes' wonderful Maine Coon and that's our No. 1 benefactor/tour manager/merch-seller, Julian, seated to the left. We start and end a lot of tours in Bloomington, it's like our home away from home.

Last week, Philly rockers the War on Drugs hit the road for their final ten shows of 2011 supporting their excellent disc Slave Ambient, wrapping what's been a jam-packed year spent battling snowstorms and befriending drunk dudes on tour. Bassist Dave Hartley captured all the action as the group traveled from Indiana to Amsterdam and kindly shared his photos with SPIN:

The War on Drugs in Bloomington, Indiana, home of Secretly Canadian (our record label). I'm holding Eric Dienes' wonderful Maine Coon and that's our No. 1 benefactor/tour manager/merch-seller, Julian, seated to the left. We start and end a lot of tours in Bloomington, it's like our home away from home. 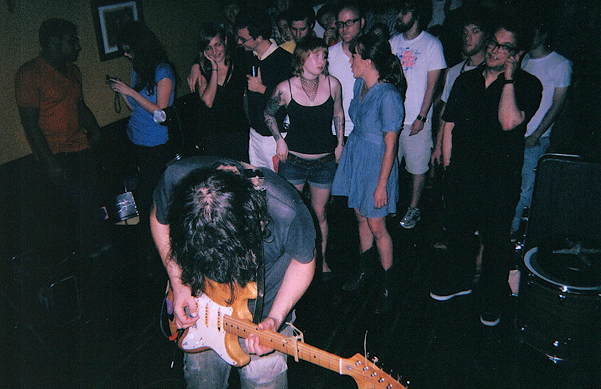 This is from a show at the Twisted Branch in Charlottesville. I believe this is from the soundcheck, but I love the photo because it looks like Adam is just shredding with his back to the crowd. 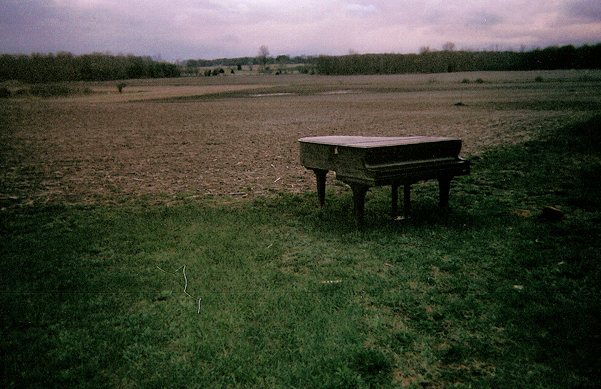 A piano in Wrenshal, Minnesota. It was just sitting in this farm field. I have no idea why it was there, but it is one of the most beautiful images I've ever seen. I'd like to go back there and shoot an album cover. Lennon-esque. 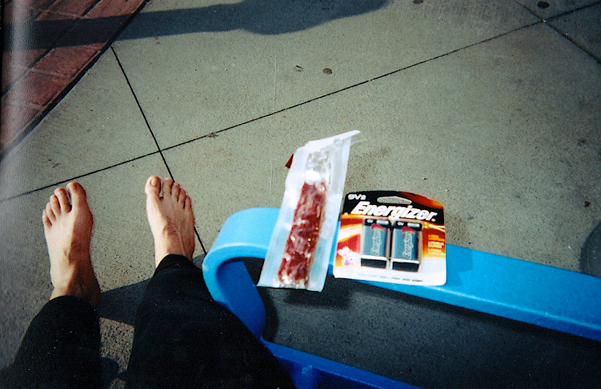 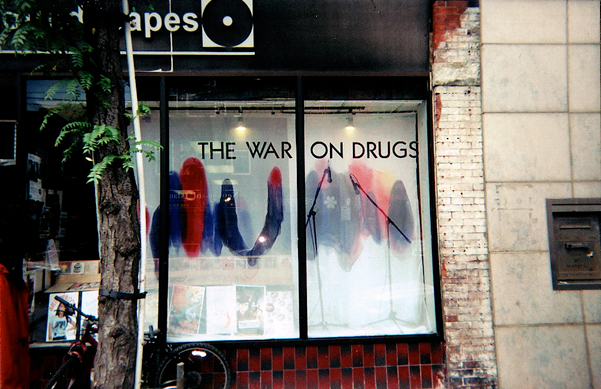 A window display from an in-store performance we did in Toronto at a place called Soundscapes. We hit a massive traffic jam on our way into town and were running way behind schedule, but I just remember when everyone saw the beautiful way they had decorated the store, we were all saying to each other, "Glad we didn't blow this one off!" 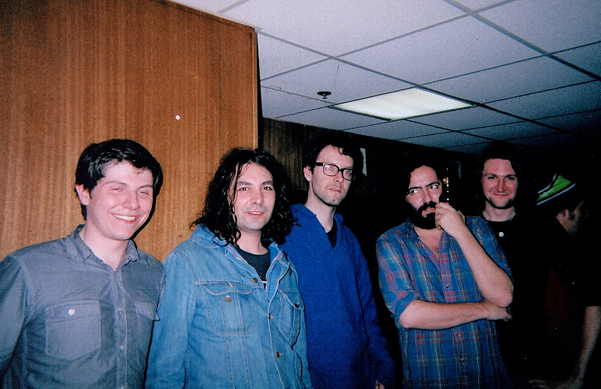 The War on Drugs with the inimitable Dan Bejar. This was in Calgary, the last show of a very long and arduous tour. It was really a beautiful time, though, and we got on so well with those guys (despite the evil eye I'm getting in this photo). 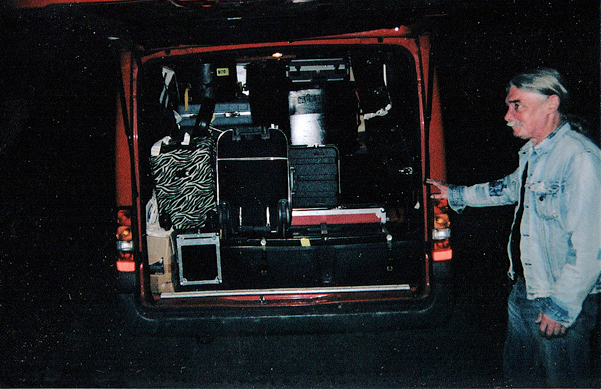 We take packing the van very, very seriously. It's a metaphor for the human condition. This was from a particularly strong pack in Leeds, U.K. The gentleman seen here was too drunk to speak, if I remember correctly. 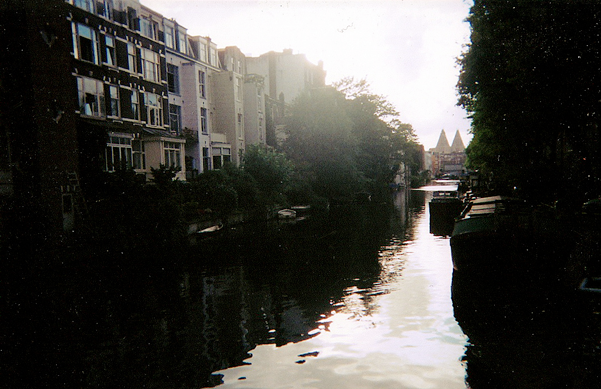 The view from the landing of the Paradiso in Amsterdam, one of the best venues in Europe. We have played there a few times (in fact it was the first place we ever played overseas) and this most recent time was really special because we were there with our great friends, Megafaun. 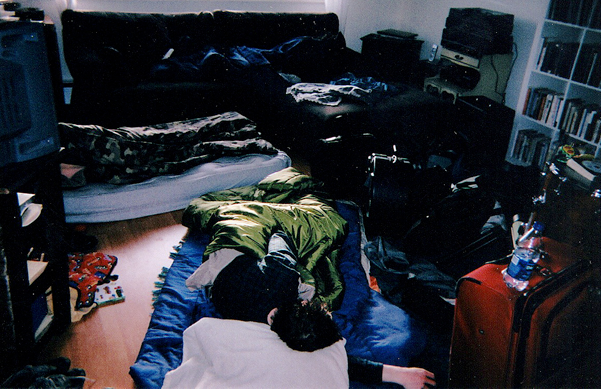 This is where we slept on the first show we played with Destroyer, in Vancouver (that's right, the tour started in Vancouver and ended in Calgary, if you're keeping track, with 30 shows in between). We crashed on a lot of floors in the past seven or eight years of touring; in this case we stayed with Carey Mercer (Blackout Beach, Frog Eyes). 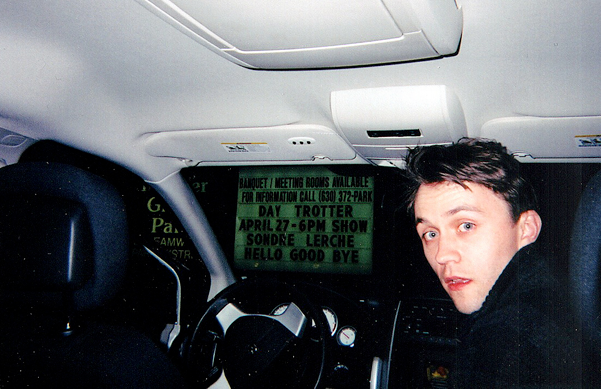 At the end of the Destroyer tour I flew directly to Minneapolis to do Daytrotter's Barnstormer tour playing bass with Sondre Lerche. It's an amazing tour, they just do these huge shows in random barns all over the midwest. I was incredibly fried from all the endless shows and had to learn a bunch of songs on the fly, but it was worth it — great musician, great person. 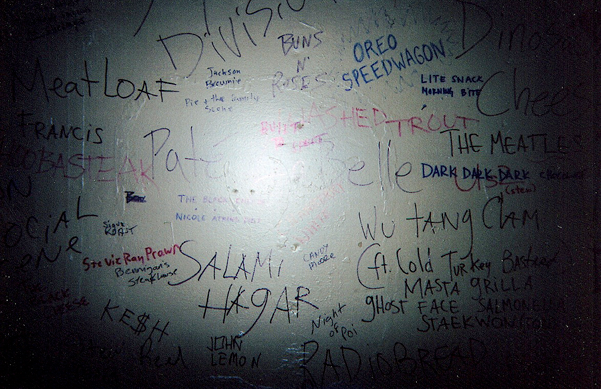 The best greenroom graffiti I've come across is at the Hi-Dive in Denver — it's all band name/food puns. I added one: Emerson, Lake and Parmesan. 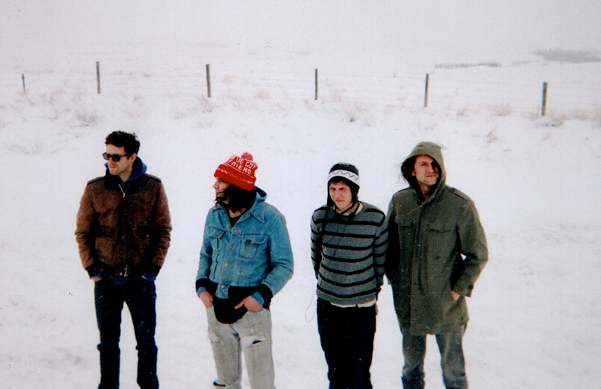 When we crossed the border from Canada into Montana, we entered this blinding white void of snow. It was so beautiful and unendingly monochromatic, we had to pull over and have Julian snap some shots of us. 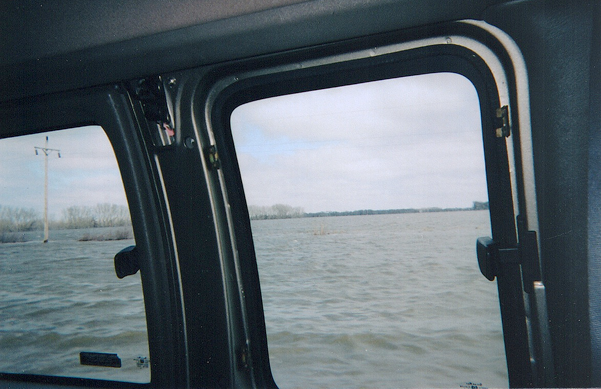 I found it strange that no one warned us that Canada was almost completely flooded out in certain areas in April. The snow melts, and the water has nowhere to go. We drove through what looked to be a massive, shallow inland lake for a stretch heading up to Winnipeg, thinking we'd have to start paddling at some point. 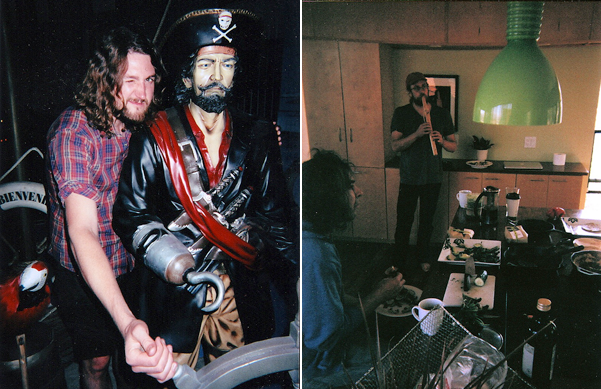 (left)Robbie is a pirate, so it seemed like a good idea for him to pose with one of his brethren. We played the Homeless Music Festival in San Sebastian, Spain and our defacto green room was this massive fun house filled with life size figurines and amusement park rides.

And Seth from Akron/Family really pulled out all the stops for us when we passed through Tuscon — food, shelter and hippie peace pipe music. He also gave Adam a guitar pedal that plugs into your iPhone. Love that guy. 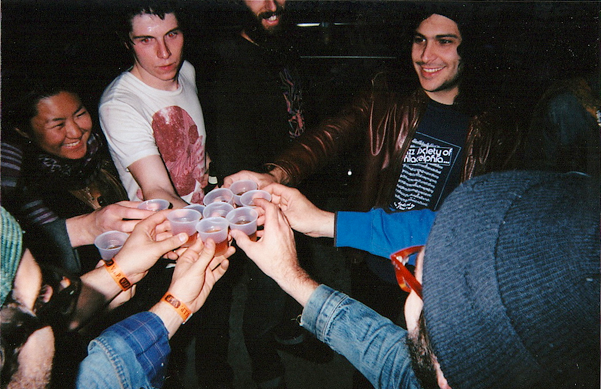 The last show of our U.S. tour with Purling Hiss and Carter Tanton. We became really tight with everyone in those bands; it felt like a family by the end. 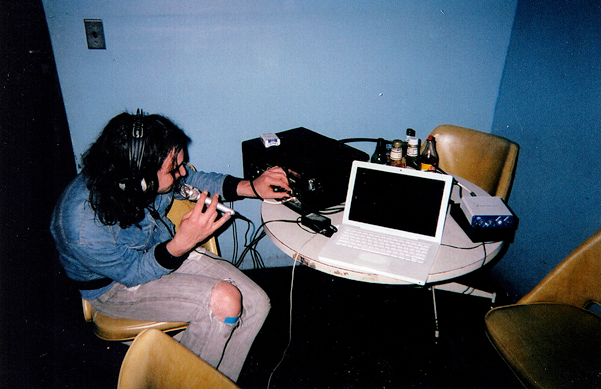 Backstage at the Black Cat in Washington, DC. Adam was asked to write and record a song to potentially be placed in a commercial for Kraft Cheese; we were in the middle of a brutal 16-shows-in-16-days stretch so just had to plug the Space Echo right into Pro Tools and bang it out during Destroyers' set. They didn't use the song, for some reason. 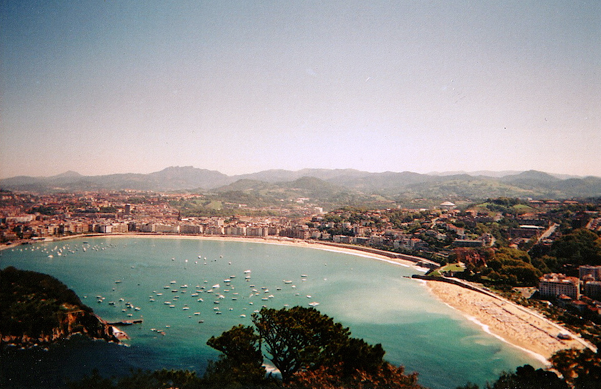 Beautiful San Sebastian, nestled in the rolling hills of northern Spain. We played down there on the beach a few years ago. This was the view from the stage for this last show (!). 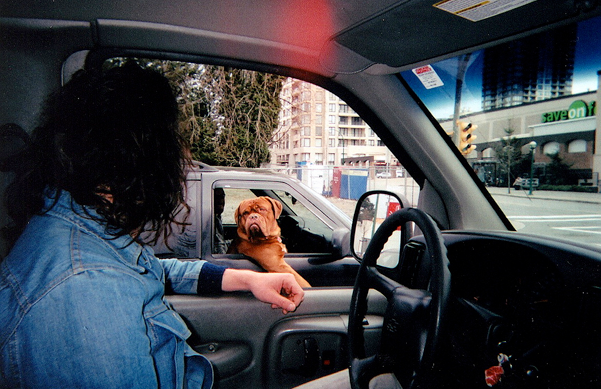 One of the highlights of the year was seeing this dog in Vancouver. It was so anthropomorphic, you couldn't believe it. And it's a meme! We saw a meme in the flesh! 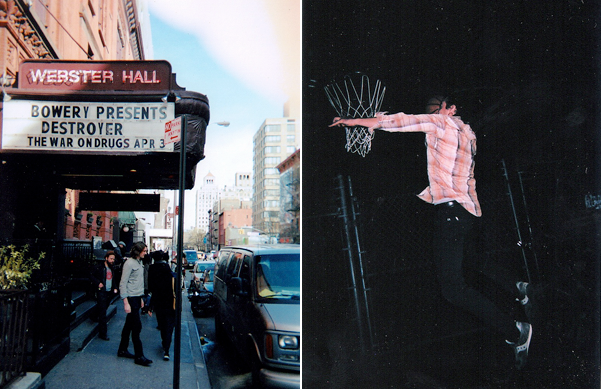 (left) Robbie and Julian in front of Webster Hall. I think I knew the War on Drugs would be OK when I realized that Adam's songs sounded better the bigger the room was that they bounced around in. Love that place, we had fun that night.

And that's Adam skying for a dunk. We love playing the Earl in Atlanta because we can hoop after soundcheck and again after the show. Also, the rim is adjustable so we can get our Darryl Dawkins on. We talk about bringing a hoop on tour with us if we someday have the means; it'd be amazing to challenge an audience member to a game of one-on-one at some point during a 15-minute ambient jam. 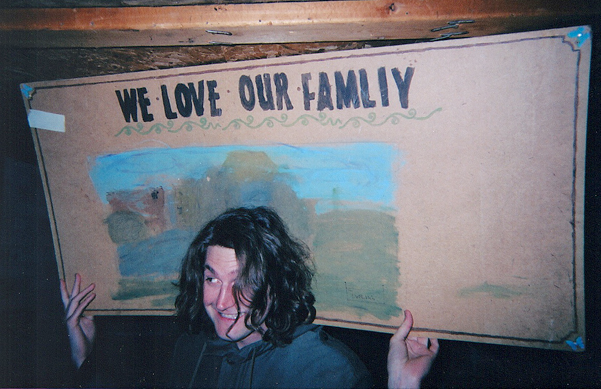 I think we pinpointed the three-week point as the time when Robbie starts to overtly lose his mind. There are warning signs around two weeks, but he just becomes a walking, keyboard-playing lunatic after three weeks. Almost nothing that comes out of his mouth sounds like something a human says, and the few things that do make sense sort of trail off and then become manic laughter.This was at about the six week mark, on 4/20 in Eau Claire. We got really weird that night.