Hear Main Attrakionz Team Up With Danny Brown and G-Side 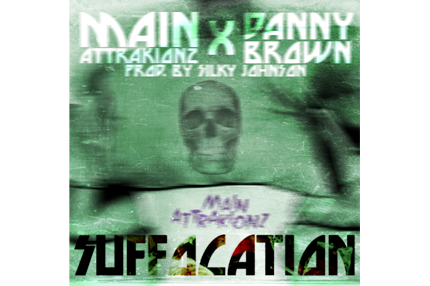 On “Suffocation,” MondreMAN, one-half of the self-proclaimed “Greatest Duo Ever” — Oakland cloud rap weedheads Main Attrakionz — gets laced with a floating, hazy jam from producer Silky Johnson and thankfully shares it with his partner in rhymes Squadda B and Detroit drug aficionado Danny Brown. Both MA dudes are perfectly at home settling into Silky’s wide-open, atmospheric beat, while Brown sandwiches a quick, replay-worthy verse in between Mondre and Squadda’s turns, his quick-spit flow daring the beat to catch up to him. — Luke McCormick

Main Attrakionz also teamed with Huntsville, Alabama’s G-Side’s 2Lettaz for “AC,” a woozy song with a nimble jazz-funk bass line. “Smoke weed for breakfast,” the Bay Area’s reps brag near the start, and the laid-back mood unfolds languidly from there. And internet rap fiends get an early Christmas present (via Nah Right). — Marc Hogan

Main Attrakionz, G-Side, and Danny Brown are all featured in SPIN’s latest cover story on the changing face of hip-hop (and one of them just earned No. 1 on SPIN’s 40 Best Rap Albums of 2011). As a bonus, get up-close with the Oakland duo in our video interview below.