Singer vows to make up all canceled shows 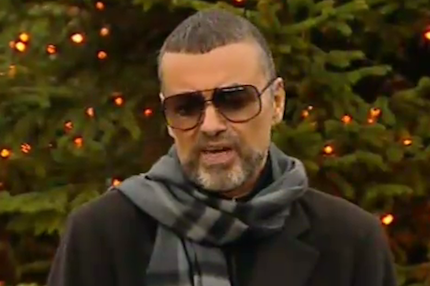 George Michael has returned to the U.K. after a month-long hospitalization in Austria that interrupted a European tour and told reporters the “worst month of my life” nearly killed him. “I got streptococca-something … It’s a form of pneumonia and they spent three weeks keeping me alive basically,” he said, praising the doctors at at the AKH hospital in Vienna who called his illness a “severe pneumococcal infection.”

At a press conference outside his London home (which you can watch here via the BBC), a weak-looking Michael, 48, said he woke up 10 days ago in the hospital. “I’m incredibly, incredibly fortunate to be here,” he said. “I have to believe that somebody thinks I’ve still got some work to do here.”

He said thoughts of his family and “the thought of all the people I still have to play to” kept him encouraged. “I’m really sorry I couldn’t contact [my fans] in any way before now, but I really was not in any state… but I promise absolutely, without any question, the plan is to play to every single person who had a ticket. Also, I would like to play one other show for the doctors in the hospital in Austria that saved my life.” Michael turned tearful speaking about the doctors who cared for him, saying thanking the medical personnel who saved him is “Something I’ve never had to do before, and I never want to do again.”

This detail from the Guardian’s report on the press conference is by far its best:

“Before he appeared, an assistant had brought out a plate of mince pies for the waiting reporters and photographers. Michael wished them all a happy Christmas and said: ‘I hope you enjoyed your mince pies.’ “