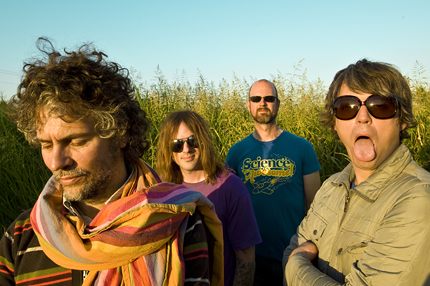 Last December, before the Flaming Lips were sticking songs inside gummy fetuses, the band unleashed their secret Christmas album via much simpler means: They created a fictional teenage master jazz pianist named Imagene Peise and uploaded 10 ghostly Xmas-themed songs onto YouTube. The instrumental composition “Atlas Eets Christmas” (“At Least It’s Christmas”?) originally surfaced as part of that collection, but Wayne Coyne’s Oklahoma crew has revisited the track for the 2011 holiday season. And this time, they’re joined by their New Year’s Eve co-headliners, Plastic Ono Band.

The union of the Lips’ doomed stoner-rock and Yoko Ono’s avant screeching seems like a potentially nightmarish aural cacophony on paper, but this new rendition of “Atlas Eets Christmas” is actually rather striking. It’s reminiscent of The Soft Bulletin classic “The Gash” if the wartime volunteer choir took a timeout from explosions and open wounds to celebrate December 25th. Plus, it clocks in 23 hours and 56 minutes shorter than the Flaming Lips’ “7 Skies H3.”

You can stream “Atlas Eets Christmas” and the rest of the Imagene Peise tracks over at the band’s newly launched Infinite Christmas Sounds site (or listen to “Atlas” below). The two bands will no doubt perform the song together during the fifth annual New Year’s Freakout in Oklahoma City. The Flaming Lips and Plastic Ono Band will also collaborate on John Lennon’s “Happy Xmas (War Is Over)” onstage when the clock strikes midnight on 2012.