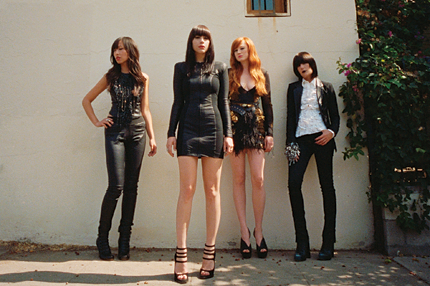 Kristin Gundred has a flair for the ?dramatic. The Dum Dum Girls leader only answers to her nom de rock (Dee Dee), sings with a spectacularly theatrical vibrato, and opens the door to her apartment on a sunny New York afternoon in a sheer black polka-dot blouse and black jeans while proclaiming, “I almost died today.”

A minor earthquake shook the Eastern Seaboard mere hours before, and Dee Dee, 29, fled the home she shares with her husband, Crocodiles frontman Brandon Welchez, plus a roommate and a black cat named Helmet. Now, having safely returned to her sparsely decorated living room (taxidermied duck, paperback copy of Carson McCullers’ The Heart Is a Lonely Hunter), Dee Dee admits that she’s wanted to be a pop star ever since she was a shy, New Kids on the Block-loving kid in the Bay Area. But there was an obstacle: “I felt uncomfortable just talking out loud,” she says. “As a preteen, I got weird and gothy and kind of never grew out of it.”

In college at UC Santa Cruz, she finally got drunk enough to get onstage (“I tried to sound like Grace Slick”), and after many halfhearted attempts to learn the guitar, she started writing songs at age 24. After ditching the first two she wrote, all her subsequent tunes have become Dum Dum Girls material.

Released this fall, the band’s second full-length, Only in Dreams (Sub Pop), is a woozy, reverb-drenched LP “about separation in all its various forms,” Dee Dee explains, citing her mother’s recent death and time apart from Welchez as recurring themes. “But,” she argues, “it’s still a pop record.” Richard Gottehrer, who produced the first two Blondie albums and the Go-Go’s Beauty and the Beat, helped capture a grand, vintage vibe, which will be showcased on tour this month.

Though Dreams — the band’s first effort to feature all four current Dum Dums (Dee Dee, guitarist Jules, bassist Bambi, and drummer Sandy) — documents the hardest year of the singer’s life, a bright spot emerged when she met a crucial influence. “Sonically, we’re pretty gnarly by comparison, but I was able to meet Ronnie Spector and talk about music,” says Dee Dee. How’d that go? “Hopefully, we’re going to do something together in the future,” she says smiling. Apparently not too gnarly.
BUY THIS ISSUE
Read the entire December 2011 issue of SPIN, available now for iPad.