Drake Has Mixed Feelings About Woman With ‘Drake’ Face Tattoo

'It's crazy, it's surreal, I don't even want to look at it anymore' 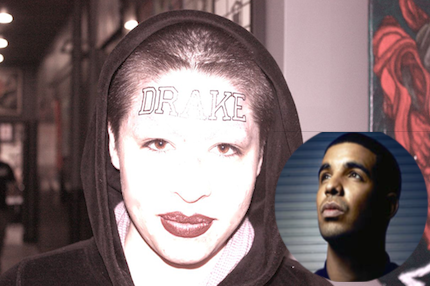 Watch now as Drake struggles to come up with the right words to describe how he feels about a young lady who has his name tattooed on her forehead in really big capital letters. Note to anyone who thinks the Take Care rapper is a softy: he makes threats!

The topic came up during an interview with L.A. radio host Mando Fesko (via MTV), who watched as Drake went from curious to shocked to angry to sympathetic to disgusted.

“I want to meet her and understand why… what happened,” he said. “That’s cool, though, I feel you, 100 percent. That, to me, is absolutely incredible… the guy who tatted it is a fucking asshole, though I will tell you that, I don’t fuck with that guy, fuck you to that tat artist, by the way, because you’re an asshole, for real, and you should lose your job, and you should never do tattoos again, I don’t fuck with you and if I see you I will fuck you up. But real shit, though, I want to talk to this girl and understand it all, you know? It was love. I mean, it’s crazy, it’s surreal, I don’t even want to look at it anymore.” Uh, neither do we.

Two weeks ago when this all went down, Vice spoke with the tattoo artist in question, Kevin Campbell from Los Angeles’ Will Rise, who said he didn’t know who Drake was when he did the work (he then called him a “goofnugget R&B dude”). “My whole deal with people wanting completely outrageous and potentially life ruining tattoos is this: I’ll ask them three times if they really think that it’s a good idea, I tell them what the potential consequences of getting a tattoo on their face might be, and after that, the bad decision is on them,” he said. “I guess I feel bad that this dumbass got the name of the softest motherfucker in hip-hop tattooed on her forehead. But what makes that any less valid of a tattoo to her?”

Also notable: Campbell said the tattoo isn’t even done yet — the young lady in question only had enough money for the outline during her first visit to his shop.