The singer and guitarist were just two of the many guests in a diverse lineup at this year’s “Dimebash,” a tribute to both the late Dimebag Darrell and metal icon Ronnie James Dio, who died last year. Others onstage included Tom Morello of Rage Against the Machine, Anthrax’s Scott Ian, Serj Tankian, Ben Harper, Jerry Cantrell, Geezer Butler, Duff McKagan, Disturbed’s David Draiman, among many. There was also a raffle of Dimebag and Dio figurines at the sold-out, six-hour concert.

“I don’t think it’s ever been this eclectic. That’s the Dio element as well,” Anthrax guitarist Sott Ian told Spin backstage after thrashing through Pantera’s “New Level” — a song Ian frequently played onstage with Pantera during their shared ’97-’98 tour. It was one of six songs Ian peformed last night. 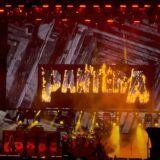 The show was a benefit for the Stand Up and Shout cancer research fund, founded by Wendy Dio, the singer’s widow. For Ian, the night was also about a good time. “Hang out, jam a bunch of songs with my friends, have some drinks and have a good time — which is what Dime would want everyone to get out of this,” Ian said. “That’s what Darrell was about.”

Downstairs by the bar, Alice in Chains drummer Sean Kinney had arrived just as bandmate Jerry Cantrell performed a hearfelt “Wish You Were Here.” Their band and Pantera never toured together, but knew each other well, and were horrified by Dimebag’s murder onstage by a gunman in 2004. “We were very good friends with those guys,” said Kinney, in Los Angeles to work on song ideas with Cantrell for a potential new Alice album. “We came up the same time. Jerry’s been friends with those guys from way back in the 80s. It’s just a horrible disgusting tragedy.”

Before sitting in with his friend Mike V’s band Saints of Low, Ben Harper was in the stairwell backstage with his lap-slide electric guitar. While best known for songs of folk, blues, soul and rock, Harper said heavy metal and punk (from Sepultura to Black Flag) have always been part of his record collection. And last night, he wanted to get loud. “Very. Got to make Dimebag proud,” Harper said. “We should all be so lucky to have an annual tribute like this.”

Greeting Harper in the stairwell was Morello, who first met Dimebag backstage at a Black Sabbath show in the late-’90s. “He was so positive and jubilant about metal and Jägermeister,” Morello recalled with a laugh. “Before we exchanged names, he had poured about five shots of some Jäger-toxic concoction down my throat. We exchanged some rock-bro I-love-you-mans, and we had a few more shots.”

Onstage later, Morello picked up his “Arm the Homeless” electric guitar and unleashed a searing duet on Bruce Springsteen’s “The Ghost of Tom Joad” with Serj Tankian of System of a Down. Before going on, Tankian told SPIN he’d never performed the song before, so he and Morello had an impromptu rehearsal “in the bathroom earlier — a professional rehearsal session with unplugged guitar next to the toilet.”

“I got into the backstage and I’m walking down the hallway,” Tankian added with a grin, “thinking, man, I haven’t seen this many rockers in one place since the early-90s probably. Fuck yeah. Good vibe.”

Morello then relived his teen hard-rock dreams by ripping through the Dio-era Black Sabbath anthem “Mob Rules” with Sabbath bassist Geezer Butler, drummer Vinny Appice and Draiman on vocals. “That was fucking awesome for me,” he said from the stage.

“I’m here to support the charity, but also to rock in honor of their memory,” Morello said earlier of Dimebag and Dio. “The thing that they shared was such a passionate and unapologetic love for hard rock music and for the fans. To rekindle the spirit of their life-force, we’re here to rock in their honor tonight.”