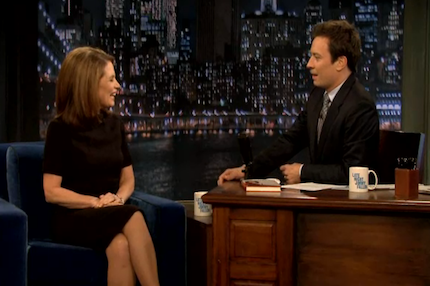 The Roots’ ?uestlove got into some trouble last month after the band played Fishbone’s “Lyin’ Ass Bitch” as the intro music when Republican presidential candidate Michele Bachmann visited Late Night With Jimmy Fallon. The Roots had taken subtle digs at guests in the past — like when they played Beck’s “Loser” as walk-on music for Spencer and Heidi Pratt — and while the Bachmann surprise entrance was loudly lauded by the show’s more liberal fans, NBC was less than pleased with ?uestlove’s choice of intro music. It’s one thing to rag on D-list reality stars; it’s another to mock the potential President of the United States (shudder).

Fallon tweeted after the incident that ?uestlove was “grounded” after the Bachmann flap, and yesterday NBC handed down their official punishment: From this point on, the Roots’ intro music for guests must be approved by NBC execs beforehand, the New York Post reports. Fallon previously only once vetoed the Roots’ intro music, when they wanted to greet Katie Holmes with Thomas Dolby’s “She Blinded Me With Science.” (Because she’s a Scientologist, get it?)

“The [Bachmann] performance was a tongue-in-cheek and spur of the moment decision,” ?uestlove said in a statement following the Fishbone incident. “The show was not aware of it and I feel bad if her feelings were hurt. That was not my intention.” NBC’s decision doesn’t mean the Roots still can’t be creative when it comes to welcoming guests on the show, but it prevents a similar situation from arising in the future. Like if Herman Cain appears on Fallon, don’t expect “99 Problems” or Ludacris’ “Area Codes” or Elvis Costello’s “Blame It on Cain.”