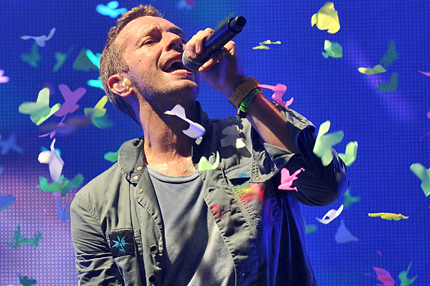 Coldplay will load up on blacklights and neon graffiti next year when they take their new album Mylo Xyloto on the road for an extensive North American tour starting in April. The jaunt will kick off in western Canada and then work its way south to a pair of gigs at Los Angeles’ Hollywood Bowl. Coldplay will then return to the U.K. for a while to play some shows there before returning to the States in June to serenade fans here with “Paradise.”

Give Coldplay credit for having the guts to schedule an arena tour in the middle of the summer; this quite possibly has never happened before. Usually bands of Coldplay’s caliber would spend those June/July/August months touring stadiums or amphitheatres. For instance, the group could have easily played at East Rutherford, New Jersey’s MetLife Stadium (capacity: 82,566) on August 3rd, but they chose the neighboring Izod Center (20,000 for concerts) instead. Chris Martin apparently would rather his fans be well air-conditioned when Coldplay comes to town.

Also, strike Coldplay off the list of artists that could potentially perform at Lollapalooza. The band headlined the fest last year, but they’re scheduled to perform at Chicago’s United Center on August 7, two days after the 2012 Lollapalooza ends. Tickets for Coldplay’s tour go on general sale on December 17, except the two Hollywood Bowl gigs, which will be available starting January 9.