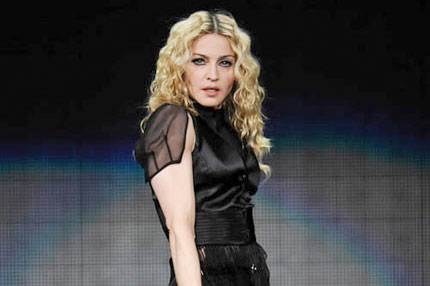 After a poor-quality demo of a new Madonna song now known as “Gimme All Your Luvin’ ” leaked in November, the singer’s manger Guy Oseary tweeted, “madonna told me this morning ‘my true fans wouldn’t do this’… whoever is responsible for this leak, we ask that you please stop!..” Team Madge was not messing around: Reuters reports that an investigation called “Operation Madonnaleaks” has successfully tracked the hack to Spain, where authorities arrested a 31-year-old whose initials are JMR in Zarazoga. The man was taken into custody, charged, and released. According to a police statement, he is a “big Madonna fan.” Maybe not anymore!

Madonna’s still-untitled new album is due in March via a new label deal with Interscope, and she is collaborating with Cirque du Soleil and her longtime choreographer Jamie King for a halftime performance at the Super Bowl on February 5. The Golden Globe nominee has yet to say whether new buddies M.I.A. and Nicki Minaj will be joining her, but Minaj effectively confirmed the news by rapping about it on a fresh track called “Stupid Hoe.”