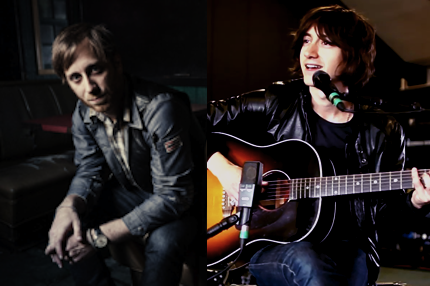 What’s black and white riddled with fuzz? No, not Jim James in a tuxedo… It’s the Black Keys and Arctic Monkeys, who are spending 2012 together traipsing around North America on an arena tour kicking off March 2nd, a stone’s throw away from Dan and Pat’s Ohio hood.

This union of riff-roaring royalty feels oh-so-right: Both are recent SPIN covers stars, and both debuted rock-steady new albums in 2011 — the Monkeys’ Suck It and See and the Keys’ El Camino rocked the plaid off the flannel of our reviews staff. But, most importantly in the Internet age, they became viral stars: The Monkeys gave drummer-turned-biker Matt Helders something new to wail on in their NSFW videos for “Suck It and See” and “Evil Twin” and the Keys’ “Lonely Boy” rocketed to YouTube success thanks to their, uh, footloose paunchy dude with moves like Jackson. Not bad for a security guard!

So far only 15 dates are listed, mostly in the northeast, but keep an eye on Arcticmonkeys.com for possible additions. If you can’t wait, here’s 5 tracks from El Camino. The band performed two of them on last night’s Saturday Night Live during their second turn on the show in ’11.??