Sorrow for Amy Winehouse was a boon long before it became a burden. Like her foremothers — Billie Holiday, Etta James, Ronnie Spector — the notoriously stage-shy singer could conceal searing tragedy beneath a cocksure veneer, letting her voice crack at crucial moments, but never enough to undermine her ferocity. The chutzpah germinated on 2003 debut Frank; her broken-up, bad-girl tenacity peaked on 2006 breakthrough Back to Black. And despite her wryness and waywardness, she maintained a gleam that evades most weary love-warriors, right up until her tragic death in July.

But before the Blake tat, before the messy photographs, before the worrisome live performances, it was about the talent. So when addiction and the subsequent tabloid exploitation snowballed, her fire dimmed. Then sadness began to subsume her infinitely lovable brassiness, and the songs eventually stopped coming, too. It was devastating but appropriate.

Lioness is Winehouse and her executors taking back the music, as if to remind us why she was the subject of such intense interest and scrutiny to begin with. An anthology of unreleased tracks compiled by her most prominent producers, Salaam Remi and Mark Ronson, with blessings from her family, the selections range from pre-Frank material to the last song she ever recorded, all united by a distinctive rawness, her voice kept naked and slightly flawed, despite the sophisticated production. In context, some of the takes are jarring — a glowering, lusty warble on “A Song for You” sounds beautiful and cigarette-stained. The live quality also emphasizes that intimacy, as when the track fades out amid in-studio chatter debating the merits of Donny Hathaway vs. Marvin Gaye. 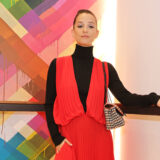 Apart from the stylistic proclivities of Remi and Ronson, it’s clear why Winehouse gravitated towards ’60s R&B and doo-wop songs like “Will You Still Love Me Tomorrow?” (She even contributes a lighthearted version of the “The Girl From Ipanema,” put forth like a party invite to Astrud Gilberto.) She was good enough to take on the Great American — or Brazilian! — Songbook and make it her own, and likely connected with those tracks’ inherent wistfulness. There are new tunes here, including “Like Smoke,” which thrills despite a mildly appalling Nas verse; but it’s on those indelible classics that Winehouse shines the brightest. Her swooning interpretation of 1963 R&B easy-listening standard “Our Day Will Come” is sung with what you imagine as an anticipatory smile, pleasant sweetness coasting over a ska downbeat.

It’s difficult not to focus on the loss that preceded Lioness, but the album reiterates, albeit bittersweetly, that Winehouse’s most important legacy was her gift. This fact is most gutting on the original cut of “Wake Up Alone,” track 9 of 12 here, perhaps too obvious for a grand finale. Paired with brushed drums and simple guitar, she gives it the full torch-song treatment. And as the music fades out, she moans the chorus, over and over: “And I wake up alone… And I wake up alone….” The triumph in the tragedy was that she sang eloquently enough for all of us.