Track said to have originated with former EMI exec 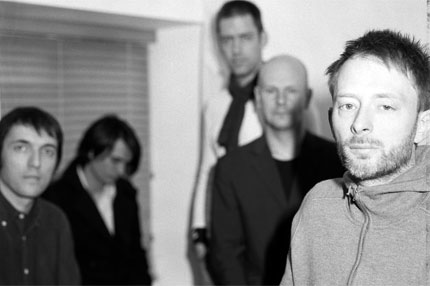 As Radiohead work on new songs for their upcoming 2012 tour, supposedly older material attributed to the band keeps surfacing online. Last month it was a pair of tracks said to date back to the now British art-rock giants’ first demo tape. Now, what appears to be an unreleased Radiohead demo from the early to mid-’90s has hit the Web.

“Putting Ketchup in the Fridge,” as the latest track is purportedly titled, puts a soaring, Thom Yorke-like vocal over shuffling drums, languidly elegant guitars, and an anthemic bass line. As Radiohead fan blog At Ease points out, a pretty good comparison is “How Can You Be Sure?”, a killer B-side from 1995’s hugely influential The Bends. There’s even a similar question-as-chorus: “How do you sit still?”

Of course, there’s no confirmation yet from the Radiohead camp. The source of the leak is reputed to be a former EMI executive, which, if true, would surely lend the track some veracity. Like the song says, though, how can you be sure? A lot of people have tried to sound like The Bends-era Radiohead. Listen to this one below: