'21' has become the best-selling album of the past seven years, and Adele is 'back on my grind' 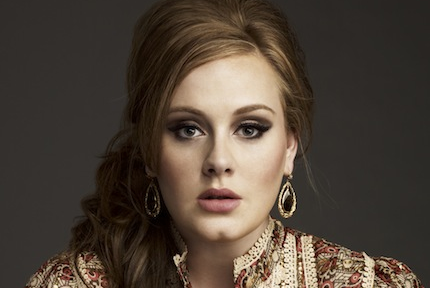 If Adele was radiating a certain cheer in a photo posted on the English singing sensation’s Twitter account yesterday, her hair and makeup stylists might not be able to take all the credit. Adele’s 21, already the best-selling album of 2011, has reached U.S. sales of more than 5 million copies, surpassing single-year sales of every album since Usher’s Confessions crossed the 8 million mark in 2004, according to Billboard. Sometimes it lasts in love, and sometimes it spawns the best-selling album in seven years instead.

But Adele isn’t resting on her many laurels. While “Rolling in the Deep” fans are rolling deep these days, the retro-soul songbird is out there grinding — her word, pretty much. Adele tweeted an endearing snapshot of her freshly done-up self sitting in the back of a car yesterday, writing, “Back on the grind. Hair and make up did. Merry Christmas! Axx.” It’s the latest hopeful sign of a successful recovery from the “Someone Like You” hitmaker’s recent throat surgery.

When not setting sales milestones and showing up on year-end lists, the Budweiser-averse singer has been keeping a low profile. She scored six Grammy nods, natch. And you can hear someone very much like her on the new concert DVD/CD Live at the Royal Albert Hall. Onward to 23!