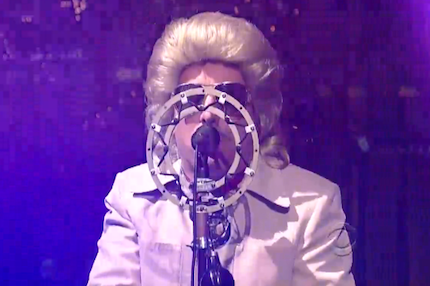 Maynard James Keenan has said Tool are currently working on their first studio album since 2006. But he still has his hands full with his other band Puscifer, fresh off the release of their latest LP, Conditions of My Parole. When Puscifer made their late-night TV debut on Late Show With David Letterman Monday night, Keenan had his upper lip full, too, with a very rock’n’roll mustache.

For this Halloween performance (via the Audio Perv), Keenan also sported an outrageous suit and retro microphone, as the band played their new album’s title track, which includes holiday-appropriate mentions of Dracula and zombies. Letterman pal Paul Shaffer wailed on the keyboard like it was the last monster mash of the evening — and if you watched on your couch last night, it probably was.