Watch This ‘Chill’ Scientology Rap Video At Your Own Risk

Synth-rap ode to the organization L. Ron Hubbard built will sear itself into your cortex 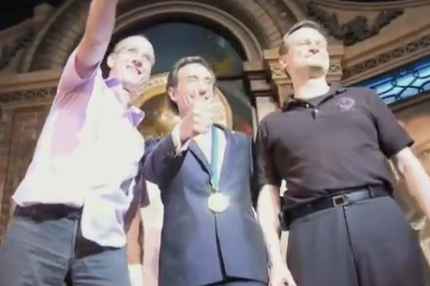 It’s been a tough week for the Church of Scientology. First, Comedy Central announced the creators of South Park have signed on for three more seasons. And now, the Village Voice’s Runnin’ Scared blog has flagged a Scientology hip-hop music video — apparently intended for internal church use — that will be hard to forget once you’ve watched it.

Thought to be the title track of a CD titled Dauntless, Defiant, and Resolute by a hip-hop artist called Chill EB, the featured song is soaring synth-rap in the style that was all over Top 40 radio around the time of T.I.’s “Whatever You Like” — only in this case, it’s all about the awesomeness of “the IAS,” a.k.a. the International Association of Scientologists. “We’ve got the greatest campaigns this world has ever had,” asserts the rapper, over a video that shows breakdancing, synchronized fist-pumping, and a whole lot of framed certificates. The evil Lord Xenu doesn’t stand a chance.