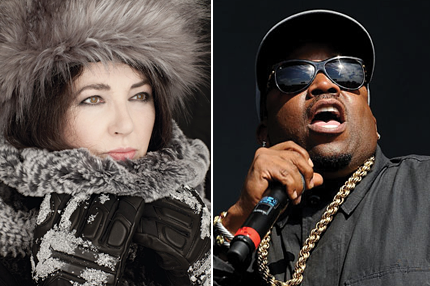 Big Boi’s recent praise for Kate Bush’s new album 50 Words for Snow has been making the rounds lately, and with good reason. “The album, to me, is just very somber and very chill,” the OutKast MC memorably told Rolling Stone. “Knowing her music and being a fan, it’s very, very deep Kate Bush for me. It’s concentrated. It’s raw emotion. It’s almost like a scene from her diary — she seems to be in love like a motherfucker. Really, really, really in love.”

Still, Antwan “Big Boi” Patton’s deep feeling for Bush’s music shouldn’t come as a surprise. As Rolling Stone notes, the rapper has been a fan of the idiosyncratic British singer-songwriter since his uncle turned him on to her records when Big Boi was only in middle school. In fact, Daddy Sax’s ongoing admiration for the singer behind such classic songs as “Hounds of Love” and “Running Up That Hill” is well documented. Below, some examples from the past: