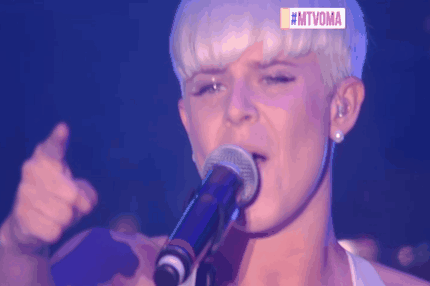 At last year’s MTV Video Music Awards, Robyn was left serenading the live audience during commercial breaks — a thankless role filled this year by broken-legged U.K. pop phenom Jessie J.MTV made up for the poor billing Monday night at its digital-oriented O Music Awards in West Hollywood, California, tapping the Swedish pop singer to perform several songs from for the assembled Halloween throngs. Based on the video evidence (which MTV won’t let us embed), she was in typically fine fettle for renditions of “Call Your Girlfriend,” “Dancing on My Own,” “Hang With Me,” “Fembot,” and “Indestructible,” all from last year’s wonderful Body Talk album trilogy.

A pre-recorded Yoko Ono was also on hand, introducing the Flaming Lips’ iPad-based take on the Beatles’ 1968 classic “Revolution.” Coming the same day as the Oklahoma psych-rockers’ 24-hour song, the robotic cover was a video salute to the late Steve Jobs — a noted Beatlemaniac and also MTV VJ Matt Pinfield’s choice for “most important man of the century so far.”

But then MTV gave away awards for things called “Too Much Ass for TV” and “Oops I Did It Online,” undermining any sense of gravity the proceedings might have achieved.

Watch the performances at MTV, and check out the full list of award winners below, including Björk, Nirvana, and plenty of others. More than 22.3 million voters can’t be wrong (can they?) (they can):