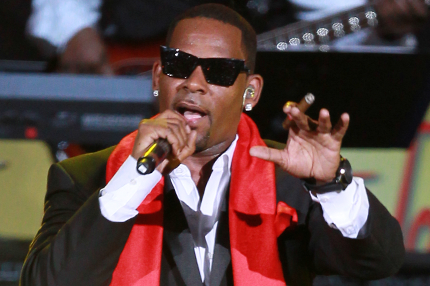 R. Kelly underwent emergency throat surgery in July at Chicago’s Northwestern Memorial Hospital to drain an abscess on one of his tonsils, and it must have been quite a positive experience because the R&B crooner just released his first post-operation track — which is inspired by the procedure itself. Adele, are you listening?

Kelly hit up his Twitter early this morning to explain, “It’s been a long time coming but I finally feel a lot better about my throat since the surgery and this is the first song I wrote.”

The untitled track — let’s call it “Shut Up!” in honor of the Black Eyed Peas and Whitney Houston — finds Kelly taking aim at the haters who said “he’s washed up, he’s lost it.” He hasn’t. Dude’s voice is in prime smooth R&B form as he croons, “I just wanna thank God upstairs for keeping his hands on me, and keeping all the doctors focused through my surgery.” Later he fires, “Tell ‘ em shut up, tell ‘em shut up, tell ‘em shut up, shut up. I’m talking to you!”

When it comes to weirdly awesome releases, Kelly is on a bit of a streak. Just yesterday, we learned the gut-busting title of his new autobiography, Soula Coaster: The Diary of Me, which he promised will drop in spring 2012. SPIN responded with a few alternate titles of our own. Check ‘em out right here.