'I had a period in my life in the '90s where I was definitely young, dumb, and full of even more dumb' 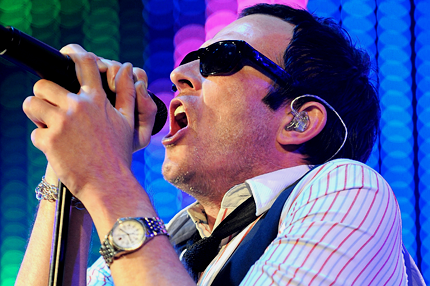 If alt-rock bad boy Scott Weiland had sang, “I’m dreaming of a white Christmas” in the 1990s, he might have been arrested. But in 2011, the Stone Temple Pilots frontman is legitimately in the holiday spirit, and on his just-released holiday LP The Most Wonderful Time of the Year (preview it here), he teams with an orchestra and lays a suave croon over time-honored classics like “Silent Night,” “Winter Wonderland,” and, of course, “White Christmas.” We called up the 44-year-old singer at his Los Angeles home to chat about merriment, getting booted from his junior high school choir, and what he wants for Christmas.

Why record a Christmas album now, more than 20 years into your career?
It’s something I’ve wanted to do for a long time. But we — myself and Doug Grean [Weiland’s regular producer/collaborator] — only recently got our studio to the point where we have a very rare collection of old vintage gear, including vintage mics and our favorite mixing board, the same board that Steve Albini uses. It has a really warm sound, which is perfect for this style of music. It cost about $12,000 and is worth about $60,000 now. So, if you’re interested in making some money, vintage gear is definitely the way to go [laughs]. We recorded with a 16-piece string orchestra, a 10-piece horn section, plus woodwind instruments, piano, standup bass, and guitar. I can’t read sheet music, I have to just listen to it, and then just go for it. You can’t restrain yourself with this kind of music. It’s very emotional music and it’s all about the phrasing and being able to change notes. [Weiland adopts a Bing Crosby-esque voices and belts “I’ll Be Home for Christmas.”]

Were there any Christmas albums or holiday experiences that inspired you?
I sang in choir as a kid. I remember being in first grade, they picked me to sing the two solos, which was very humiliating. All the other first graders were laughing at me. What do you do when you’re a kid? You’re embarrassed so you laugh with them. Then I just did the best job that I could. That got the ball rolling. So I sang in choir up to junior high and then in high school I was in the Magical Ensemble, which was the elite group. It was really cool. We’d sing Mozart and Vivaldi. Pretty heavy stuff. We did over 100 shows a year and most of them were around Christmas. I started listening to the music of the ’40s — Nat King Cole, Frank Sinatra, Judy Garland, Bing Crosby, and on and on and on. I was really, really, really moved by those albums.

Do you think this album will surprise your fans? Or will this help change the public’s perception of Scott Weiland?
My image now is only a smidgen is who I actually am. Just like Keith Richards or Perry Farrell or even Mick Jagger. Jagger was never a real druggie, but they were thought of as the bad boys. I had a period in my life in the ’90s where I was definitely young, dumb, and full of even more dumb.

But people still see you as a badass. Don’t you think fans will be surprised that the frontman of Stone Temple Pilots is now singing gentle Christmas songs?
I don’t think so. My solo albums are very avant-garde compared to Velvet Revolver or STP. It’s more influenced by bands I like such as Granddaddy and the Flaming Lips and Sigur Ros and the Smiths. Also, STP played “A Charlie Brown Christmas” song at the KROQ Almost Acoustic Christmas show a few years back. The backing vocals have this really eerie, multiple layered jazz feel.

Did anybody try to convince you that The Most Wonderful Time of the Year was a bad idea?
Not at all. Nope. And I’ll tell you why: Back in 1990, before STP were even signed, [STP bassist/guitarist] Robert DeLeo and I were very broke. Like broke, broke, broke. We had no money to buy presents for our family. So we decided to record a version of “The Christmas Song,” but we didn’t have an orchestra. We had a keyboard with some good string samples and Robert put some toilet paper behind his bass strings to mute it so it sounded like a standup bass. He had a Gibson 175 and he just played the drums on it. I mixed it and we gave it to our parents and grandparents, and to this day they say that it’s the best Christmas present that they have ever received.

What’s more difficult: Singing these classic Christmas songs or a classic Stone Temple Pilots song like “Sex Type Thing”?
It’s harder singing a song like “Sex Type Thing.” Particularly that song because I was only 22 when I wrote the melody and lyrics and it’s very blatantly an anti-date rape song, kind of like “Polly” by Nirvana. That was our first single it became huge. The story about it being an anti-date rape song was well known. But there were a couple of shows where I would wear a granny’s dress from the ’60s, and these big huge jocks were moshing. They didn’t even notice the message in the song. There have been two generations of music fans and the media is completely different now. So people don’t really know what “Sex Type Thing” is about. So it really bums me out when I see people moshing to that song. It’s basically the opposite of what we had in mind when we wrote it.

Have you thought about caroling this year?
[Laughs] That’s a possibility. The Magical Ensemble used to go Christmas caroling every year in Balboa, California, and me and my friend got into quite a bit of trouble. Everyone would bring tumblers of hot chocolate and my friend and I would sneak Schnapps in ours. We were fine with it — we were veterans by then. But some of the others involved were definitely rookies. We all got caught and it was definitely our fault. It was a stupid thing to do. We were kicked out of the ensemble, but were allowed back in the new year.

So, what do you want for Christmas this year?
I want my ex-wife and children to be happy. I want all the changes in the Middle East, which have happened so rapidly, to work out for the best. I pray to God that clearer heads prevail and those nations don’t open their doors to radicalism.

In a nutshell, you’d like peace on earth?
Yep. That’s it. Peace on earth and goodwill towards men.