Second of three fresh singles arrives with a bang 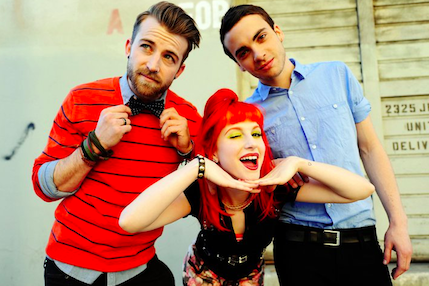 In October, Paramore promised to deliver three fresh singles via a new vinyl singles club before the end of 2011, two of which they’d previously performed live (“Renegade,” which they did at Fueled by Ramen’s 15th anniversary party, and “In the Mourning,” which they debuted as an acoustic number earlier this year). The track they said “should be completely brand-spankin’ new to all of you” — “Hello Cold World” — is here now, and one enthusiastic fan already ripped their 7″ to the web:

“Hello Cold World” is a bouncy tune about bouncing back and taking action: “You can’t just stay down on your knees, the revolution is outside / You want to make a difference, get out and go and get it,” Hayley Williams sings over a poppy mix of synths and chugging guitars, offering a rallying cry ready-made for the 99 percent. Paramore — now a trio consisting of Williams, Jeremy Davis, and Taylor York following the departure of guitarist and drummer Josh and Zac Farro — know a thing or two about self-preservation, and “Hello Cold World” is much more than the sound of a band grinning and bearing it. It’s a strong lunge toward a newly defined finish line. Listen while reading about Williams’ favorite things.