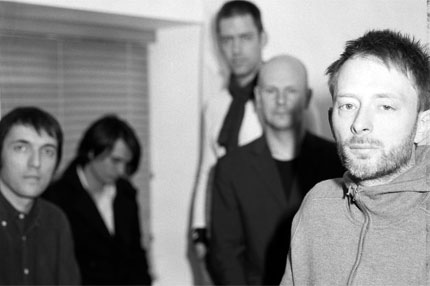 By 1984, Thom Yorke and Colin Greenwood had left their first band, the punk outfit TNT. Joined by the other future members of what would become Radiohead, they formed On a Friday, named after the day of the week they rehearsed. The last to join was the youngest of the group, Jonny Greenwood.

Now two previously unreleased tracks purportedly recorded by On a Friday for their first demo tape in 1986 — before the younger Greenwood joined — have hit the Web. Their back story appears to make sense, so there’s not necessarily much reason to doubt their veracity, but don’t listen expecting anything amazing. As with most of, say, the Beatles Anthology Vol. 1, these recordings of are worthwhile more for shedding light on a hugely influential band’s formative years than for musical enjoyment. Both “Everybody Knows” and “Girl (in the Purple Dress)” are strictly of their era and its college-rock scene, placing bombastic, U2-style vocals over post-R.E.M. jangle, plus saxophone solos that wouldn’t sound out of place on Destroyer’s self-consciously glossy 2011 album Kaputt.

The Radiohead biography Exit Music mentions a song it lists as “Girl in a Purple Dress,” so this demo wasn’t completely unheard of; in a 1997 interview with Q Magazine, the band looked back on recordings of Yorke’s songs from this era as “schizophrenic.” In fact, the better-known On a Friday demo tapes, one simply called On a Friday and another called Manic Hedgehog, didn’t come out until 1991, and were responsible for Radiohead getting signed; the self-titled tape even included an early version of Pablo Honey single “Stop Whispering.”

According to the blog poptart, what’s our mission?, which pointed out the “Everybody Knows” and “Girl (in the Purple Dress)” demos (via Consequence of Sound), the band apparently recorded these in the music room of their Oxfordshire boarding school, Abingdon School. The tracks were originally uploaded by YouTube user klootme, who explains:

“History behind the tape is that my husband was at school with the band and partied with them (before Jonny joined them!). Phil [Selway] was at Uni with us both in Liverpool. The demo was given to my husband at 17 in school. We used to go and see them play in Oxford and was friends with them. They were fairly inactive from 1987-1990 as a band. But when everyone had finished Uni they got back together and tried to make a go of it. They went to the States…we went backpacking to India for 6 months. Six months later we retured from India…saw Colin with a binbag full of laundry at the lauderette…..”so much for the States” we laughed…….” I remember seeing them in Oxford where me and my husband made up an audience of 6!”