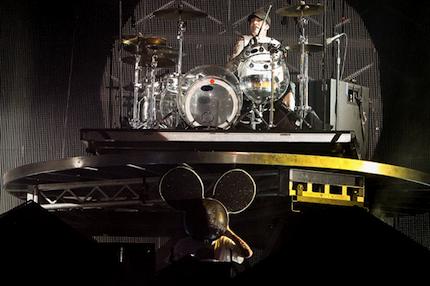 A conventional wisdom appears to be emerging that critics roundly panned Radiohead’s The King of Limbs, which came out earlier this year. In our 8-out-of-10 review of the album, however, SPIN specifically singled out choice cut “Codex” as “gorgeous,” noting that Thom Yorke sings “over his own piano, about diving into a crystal-clear lake, with no witnesses but the dragonflies.”

In a new cover version by festival-dominating electronic dance man Deadmau5, Yorke’s wisp of airy vocal is gone, replaced by electro producer Joel Zimmerman’s painstaking recreation of those melancholy keyboards, distant brass whines, and gently throbbing beats. It’s one of Radiohead’s most haunting songs recast as a computerized lullaby — and it contains no samples from the original recording, according to blog …Hang the DJ, which brings us the stream (via the Daily Swarm). Imagine how it will sound from the roof of a 387-foot London skyscraper. Can dragonflies even get up that high?