Nickelback Try to Have a Sense of Humor 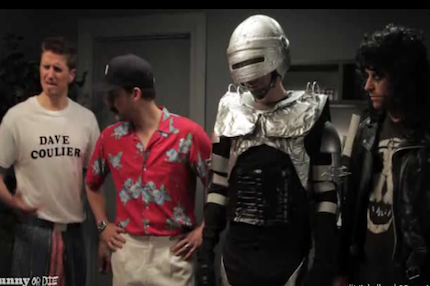 Nickelback have been on the business end of some truly awful press the past few weeks. The Canadian arena rockers were deemed sex repellent by a dating website poll, then a group of zealous football fans posted a petition protesting the band’s halftime performance at Detroit’s big Thanksgiving game against the Green Bay Packers. So they took the next logical (self-deprecating step) and agreed to appear in a Funny or Die clip.

“They called us up. They said, ‘This whole debacle that’s going on in Detroit is just lunacy. We here in the comedy field think it’s just perfect for making fun of,’ ” frontman Chad Kroeger told MTV News, likely after being thrilled to receive a call from MTV News. “We’re huge fans of Funny or Die and anything Will Ferrell is associated with — we’re there. So we’re like, ‘Absolutely, we’d love to come and make fun of the whole thing and ourselves at the same time.’ “

The clip required Nickelback dressing up like some of the Motor City’s finest alumni: Alice Cooper, Tom Selleck, and Robo Cop. It is semi-funny. But there’s a consolation prize:The band’s latest disc Here and Now is expected to debut at No. 1 on the Billboard 200 next week — ahead of Rihanna’s Talk That Talk.