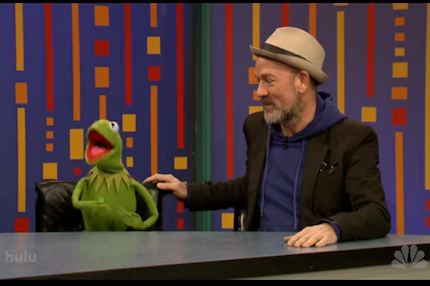 Stipe didn’t sing any songs on Fallon — a cappella or otherwise — but he did engage in some funny business. Sitting alongside actor-comedian Martin Short and Muppets characters Miss Piggy and Kermit the Frog, Stipe didn’t break much news in the interview portion, but he did reiterate that the cover of this year’s Collapse Into Now, which shows Stipe waving goodbye, hinted at R.E.M.’s decision to disband. Then the four played a round in the style of the old TV game show Password. After Stephen Colbert literally put Stipe up on a shelf the other night, though, it’s pretty weak sauce: Cable 1, Network 0. Sorry, Jimmy.

For an antidote to such awkwardly goofy TV references that predate many viewers’ births, check out Lykke Li’s performance of blustery Wounded Rhymes ballad “Silent My Song,” over on Letterman. Dressed all in flowing black garb, along with her seven-piece backing group, the 2011 SPIN cover star had her short dark hair pulled back tightly over her head, and this severe appearance lent the entire performance a somber air. With massive percussion, lush harmonies, and a tenderly emotive melody, their rendition of the moody song soon thawed the icy mood. “Haunting,” opined Letterman band leader Paul Shaffer. See for yourself.