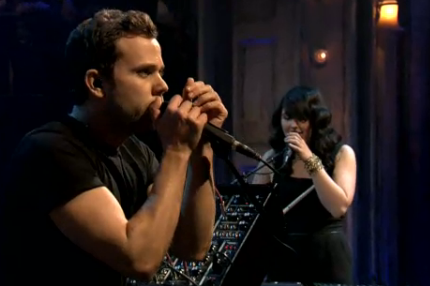 Network television got a heady rush of electronic pop on Monday night, as M83 performed on Late Night With Jimmy Fallon (after the Roots welcomed Michele Bachmann to the sounds of Fishbone’s “Lyin’ Ass Bitch,” that is). Anthony Gonzalez and his band gave wee-hours watchers a tour of “Midnight City,” a highlight from the French keyboard-sorcerer’s latest, Hurry Up, We’re Dreaming. (Those unfamiliar might’ve recognized the song’s bird-like synth call from a recent Victoria Secret TV commercial). At the song’s climactic moment, a bombastic saxophone solo continued the instrument’s long, smooth return — from last year’s Deerhunter record (“Next year everyone’s gonna have a saxophone on their record because saxophones are just cool,” Bradford Cox said at the time) to Lady Gaga’s “The Edge of Glory” to Foster the People’s bizarre Kenny G cosign. “That’s how you do it,” host Jimmy Fallon said afterward, as if addressing all the other kids with their unnecessary horn-blowing. The sax enters at 3:35.