'Did you mean "lockup ball street"?' 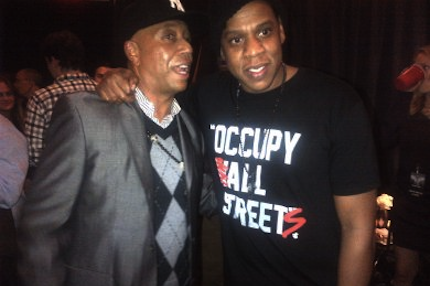 Jay-Z’s much-criticized decision to release a T-shirt cashing in on the Occupy Wall Street demonstrations last week should hardly have been surprising. As cultural critics such as Thomas Frank have argued pretty persuasively, it’s in our economic DNA to go from the Beatles’ “Revolution” to Nike TV spots, from Black Flag to Hot Topic. Nor is it really even so weird that Jay’s “OCCUPY ALL STREETS” T-shirt would be sold without any of the proceeds going to the movement itself. It’s all part of the same long and hugely complicated tradition as Che Guevara chic and The Matrix movies. But this time, there’s a twist!

What’s unusual here is that Jay-Z actually reversed himself, dropping his countercultural profit grab from the market. After receiving heaps of online opprobrium, Jay-Z’s Rocawear clothing line has apparently scrapped the “OCCUPY ALL STREETS” shirt, as the Wall Street Journal points out. A search for the phrase on Rocawear’s online store now brings up no results, though the website does ask, helpfully, “Did you mean ‘lockup ball street’?” New York notes that a Roc4Life blog post promoting the release has also been taken down.

While the initial launch of the T-shirt was tone-deaf to say the least, Jay’s decision to back off from the idea is certainly admirable. It’s also shrewd damage control. Still, it’s a little puzzling the rapper didn’t go further and just give some of the profits from his admittedly “dope tee” (Roc4Life’s words) to the leaders of this, uh, leaderless movement. We think we get it! Until some brave protester steps forward to accept this proud 1 percenter’s money, you’ll have to silk-screen your own “OCCUPY ALL STREETS” T-shirt at home.