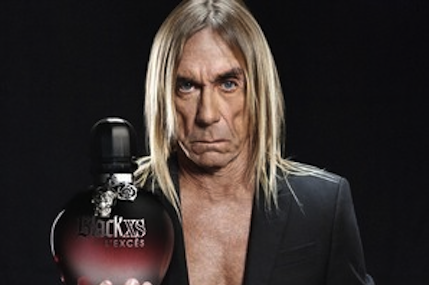 Your pretty face is going to smell! Punk godfather and reformed stage diver Iggy Pop is going to donate his rubbery mug to the advertising campaign for Paco Rabanne’s new men’s and women’s fragrances, Black XS L’Excs. While the ads make somewhat more sense than, say, the time one of his songs about heroin abuse was used in a Royal Caribbean cruise advert, we still can’t help but wonder if this thing is going to reek like glass, peanut butter, or any of the other particularly non-fragrant things Iggy rubbed on himself in the ’70s.

Per Women’s Wear Daily, the TV ads are due out in January in France, and will be directed by Jonas Åkerlund, best known for his mind-bending Lady Gaga videos (“Paparazzi,” “Telephone”) and Madonna’s “Ray of Light.” For a taste of their collaborative style, here’s Åkerlund’s video for the 1999 Iggy video “Corruption,” in which Iggy and Jonas criticize the same television that’s going to be presumably playing these ads.