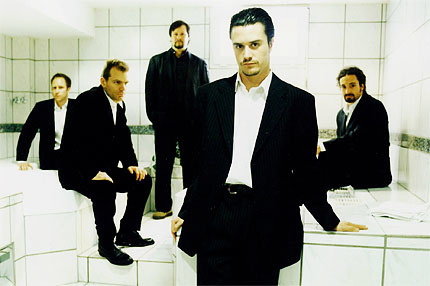 SPIN cover stars and “Artist of the Year” for 1990 Faith No More are still busy making the most of their three-year reunion, tooling around South America for a slew of shows. An unidentified song, which Roddy Bottum had referred to on Facebook as “the mystery song,” has been popping up in recent set lists in Buenos Aires and Montevideo. Its very existence naturally had fans drooling over the possibility of new material. As it turns out, its identity has been revealed as an old, unreleased leftover from the sessions from their underrated 1995 record King for a Day… Fool for a Lifetime, an album they’re playing in its entirety tomorrow in Santiago, Chile.

The track definitely has the lean, buzzcut feel of the King For a Day record, where the band shed solo-rippin’ longhair guitarist Jim Martin in favor of the alt-leaning feel of Trey Spruance; however its lethargic creepy-crawl seems beamed in from the pre-Patton “We Care a Lot” days. Check out a decent recording from Tuesday’s Buenos Aires show: