Florence Welch on Her Fear of Treadmills, Lady Gaga, and ‘Ceremonials’

Tough questions for Florence and the Machine's leading lady 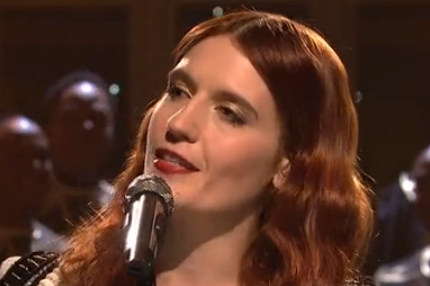 Though still a relative newcomer, Florence Welch has already amassed some impressive achievements, not the least of which is the more than 3.3 million copies sold worldwide of her 2009 debut, Lungs, a two-year campaign capped off with a stint opening for U2’s little mom-and-pop road show. But for our money, the 25-year-old singer will be hard-pressed to trump her own family history: Her uncle is John Stockwell, the actor who played Cougar in Top Gun. “I didn’t really get the importance,” admits Welch. “But if I tell any guy, they’re like, ‘Oh my God.’ For years, I didn’t realize what a tool I had at my disposal!” The leggy redhead and her band, Florence and the Machine, will look to soar with the soulful Ceremonials (Universal Republic), the follow-up to Lungs. We spoke to Welch in San Francisco.

Lungs made you a pretty big deal. Are you prepared to get even bigger?
I don’t know! I’m a bit nervous. I’m not quite sure what’s going to happen. So much has gone into making this record that I have to let it go and see what happens.

Well, according to Universal
?Republic president Monte Lipman, the single “Shake It Out” will be “an anthem in every gym in America a year from now.” So you have that going for you. What does that mean? [Laughs] If a song makes you want to move and run, that’s good. But running outdoors. I’m not very big on the treadmill because it freaks me out. I don’t like running when I’m not going anywhere. I’m kind of like Phoebe from Friends when I run. Lots of flailing.

As recently as 2009, you claimed to use a Discman to listen to music on the go. Have you upgraded yet?
Yeah, now I just use my phone. I have taken a first step into the future.

How much have you listened to Ceremonials?
Loads when I was trying to finish off the record, and after, quite a lot because I kind of liked it. And that was a nice feeling, actually, to listen to it and be like, “Oh!” It would suck if I finished it and didn’t want to listen to it. But now I’ve almost listened to it too much and I have to give myself a break.

The song “What the Water Gave Me” takes its name from a Frida Kahlo painting. Why didn’t you go with her “Self-Portrait With Monkey” instead?
That’s pretty good. I might have to make that the title of the next album. That way the artwork’s already done. You’ve just got to get a monkey.

Lady Gaga hugged you at the 2010 Video Music Awards. Did the meat dress make you hungry?
You know, I didn’t notice that it was made of meat — it must have been treated. I thought she just had some kind of body paint on or something. I did ?not notice until she got up onstage with Cher. She was even holding a meat purse, so then I’m like, “Oh, it’s made out of meat.”

Were you grossed out retroactively?
No, but I felt guilty because I was ?borrowing this Givenchy couture dress, and I’d just rubbed myself all over this meat. I felt bad for Givenchy.

Your mother is American. Have you ever eaten a hot dog?
Yeah, sure. ?A corn dog, too.

You’ve passed the test, then. You can’t be half-American if you’ve ?never eaten a hot dog.
We used to come here a lot when I was a kid ?because I had loads of family over here. I really romanticized [the U.S.]. ?I was angry at my mom for having married an Englishman, because I thought I could have been brought up in America, which to me was the land of movies. After watching Home Alone a few times, me and my sister would put on these really intense American accents and be like, “What? We’re from here. That’s how we’re supposed to talk!” — while berating each other for talking with stupid American accents.

Doesn’t your mom have a stupid American accent?
The thing is, she’s now been in England for most of her life, so she actually has a proper English accent. But when I’m doing an impression of her to other people, I put on this really thick American accent, like, “Why have you not been to bed? You’ve got to get on the plane in half an hour!”

Wait — you still live with her?
Um, yes, she says sheepishly. I don’t really have any time to move out. I’ve been looking for a place, but I’m home for what, like a week at a time? It doesn’t really make it that easy to move out.

You’re never moving out, are you?
[Laughs] My two main goals in life: having a music career and moving out of my mom’s house. It’s one or the other right now. One day I’m going to come back and all my stuff’s just ?going to be outside the house and she’ll have changed the lock.

Do you know the TV character Flo, from Alice?
No.