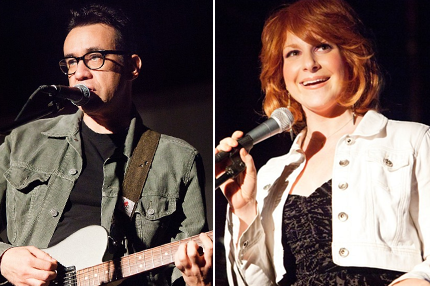 SNL and Portlandia star Fred Armisen has indie bona fides for days — he played drums for Chicago’s Trenchmouth in the ’90s, presumably with a little help from Jens Hannemann’s Complicated Drumming Technique. And as he proved at a live taping of SPIN contributor Julie Klausner’s “How Was Your Week?” podcast in Brooklyn a few weeks ago, he’s got a solid fallback as a high-tech busker if the whole comedy thing doesn’t pan out.

As if proudly showing off the new 7-inch from Crisis of Conformity — a real track by a fake aging hardcore band from an SNL skit with Dave Grohl) wasn’t punk-rock enough, Armisen accompanied himself on live-sampled guitar and drums for a spirited cover of the Equals’ “Police on My Back,” (better known for the Clash’s cover on 1980’s Sandanista). Download Armisen’s take exclusively below for your next comics-who-are-actually-talented-musicians mixtape.