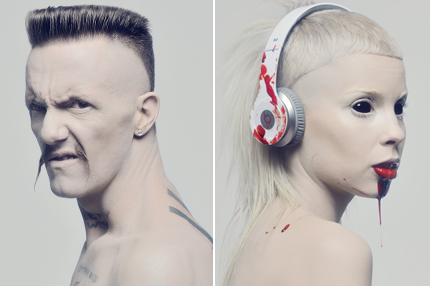 Earlier this morning, Boing Boing pointed out that South African rap crew Die Antwoord have parted ways with Interscope, their label home for the past 18 months. According to an entry on the group’s blog, the move was sparked by their label’s suggestion that forthcoming album, TEN$ION, sound “like everyone else out there at the moment. Not to be sassed or pushed around creatively, they responded thusly: “U know what, rather hang on to your money, buy yourself something nice…we gonna do our own thing. Bye bye.” Kinda awesome. According to Billboard.biz, Interscope says the band and label are “currently in discussions.”

The album will now be released digitally on their very own ZEF RECORDZ imprint, with a drop date yet to be announced or confirmed. Below, check out the clip for single “Fok Julle Naaiers,” which, according to Pitchfork, has been blocked from YouTube by their former label on charges of copyright infringement (warning arachnophobics: this may not be for you!). You can download the track for free right here. Yo-Landi told Boing Boing this track is special because “It features the first rap verse by the real DJ HI-TEK, our gay deejay, who haz just bust out da closet wif a muddafuckn vengeance!”

As SPIN reported in our exclusive preview of TEN$ION, sticking close to home was vital for Die Antwoord’s creative process: “We needed to stay in Africa and return to the tension we had before our success,” explained Ninja. “By staying home the acid trip of blowing up slowly faded away. The less that was going on the more creative we were.”