Martin Gore and Vince Clarke are VCMG, and 'Spock' is their debut single 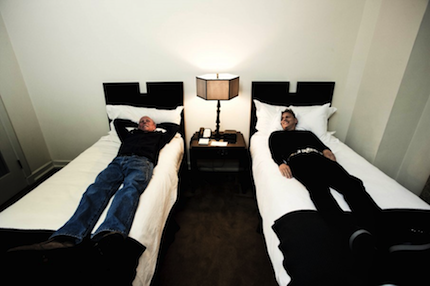 Two synth-pop pioneers are working together again, although this time with a whole lot less of the “pop.” Martin Gore and Vince Clarke formed half of the original lineup of Depeche Mode, but Clarke departed after 1981 debut album Speak & Spell — and ultimately finding his own success with the groups Yaz (Yazoo in their native Britain) and Erasure. The pair’s current project, VCMG, released debut single “Spock” on Beatport.com today, along with an EP of remixes. It’s probably not for casual fans of those other groups: This is a minimal, repetitive track, focused more on a four-on-the-floor pulse and occasional flickers of synth than traditional hooks.

The combined EP 1/Spock release will be available digitally worldwide on December 13, followed by a 12″ vinyl release on December 20. Further EPs are reportedly in the works prior to VCMG’s planned debut album — look for a finished product in spring 2012. It should definitely be better than that album of electronic dance music Eric Clapton put out one time.