'Go see the fucking Foo Fighters and do that shit' 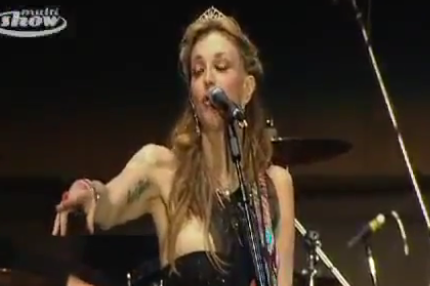 Courtney Love launched into a bizarre rant Sunday night at the SWU Festival in Brazil. According to Antiquiet, the Hole frontwoman flashed the crowd, said her status as “a gay icon” allows her to use a certain epithet that recently got Brett Ratner ousted from the Oscars, and requested “a Chapstick for my herpes sore.” She also reportedly claimed she was the inspiration for almost everything on the Smashing Pumpkins’ landmark mid-’90s albums Siamese Dream and Mellon Collie and the Infinite Sadness. She even took credit for the key lyric on SPs hit “Disarm,” saying she wrote the line “The killer in me is the killer in you” in a letter to Billy Corgan.

But the crazy really hit the fan when Love noticed someone in the crowd carrying a photograph of Kurt Cobain. As you can see for yourself in the video below, the singer somehow went from fairly reasonable anger to wild insults. The target of those insults, somewhat inexplicably: the Foo Fighters’ Dave Grohl. “You weren’t fucking married to him [Cobain], I was,” she told the audience. “You didn’t get kicked out of a band by him, like Dave, he did. Go see the fucking Foo Fighters and do that shit.” After Love stormed off the stage, her guitarist called for an audience chant of “Foo fighters are gay” to convince her to come back out.

When Love returned to the stage, the former Mrs. Cobain said, “I don’t care what you listen to at home, but if a guy takes money off my kid’s table, fuck him.” Unfortunately, at this point it would almost be more surprising if the “Doll Parts” singer didn’t do something outrageous onstage.