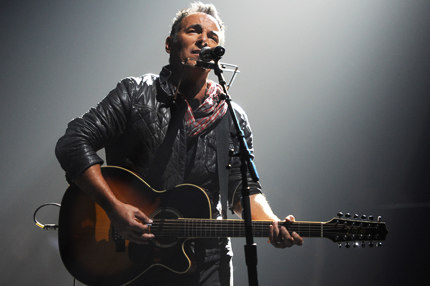 Bruce Springsteen and the E Street Band are looking forward to a big 2012. A new studio album and world tour are on the way next year, according to the band’s official website. This means the E Street Band will be carrying on without saxophonist and founding member Clarence Clemons, who died in June after suffering a stroke. The band likewise continued after the death of longtime organist/accordion player Danny Federici in 2008.

Music for the as-yet-untitled album is nearly complete, and a release date is almost determined, according to the website, which adds that “we are all incredibly excited about everything that we’re planning for 2012. That’s all the info we have for right now, but we’ll get back to you — real soon.”

Springsteen and the E Street Band will be touring Europe from mid-May through the end of July; U.K. dates have just been announced. The website promises information on U.S. and other tour dates shortly.

Springsteen’s most recent studio album with the E Street Band was 2007’s Magic, which SPIN said found Bruce, then age 58, sounding “angry, not grumpy.” The Boss has been playing with E Street since 1972; he dissolved the group in 1989 and reunited them a decade later, but the first official post-split E Street album didn’t come out until 2002’s The Rising.