Legends come out of long hibernation on National Metal Day 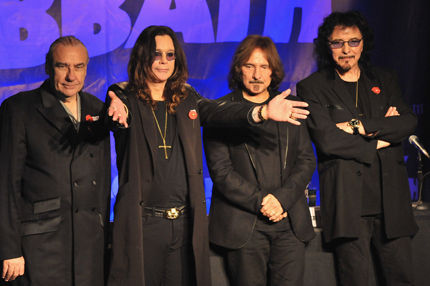 Heavy metal’s founding forgers Black Sabbath announced the details of their long-anticipated reunion today at the Whisky A Go Go, the legendary dive where they played in Los Angeles for the first time more than 40 years ago. The original band members will record a new studio album — their first with Ozzy Osbourne since 1978 — with producer Rick Rubin; it’s due in fall 2012 via Vertigo/Universal, Billboard reports. Osbourne, guitarist Tony Iommi, bassist Geezer Butler, and drummer Bill Ward will support the disc with a large-scale worldwide tour including a headlining slot at the Download Festival on June 12, 2012.

Around 11:11 EST on 11/11/11 (a holiday dubbed National Metal Day thanks to a particularly unconvincing Vh1 campaign), their not-especially-metal official twitter tweeted a photo of the venue’s marquee that reads simply “BLACK SABBATH REUNION II II II.”

Though Ozzy Osbourne has fluctuated from “Prince of Darkness” to “Weird Uncle” time and time again over the last few years, what never changes is Black Sabbath’s reputation as the unfuckwithable bedrock on which all heavy metal was constructed — thus, we don’t mind salivating over each of the countless on-and-off reunions they’ve had since 1997. The reunited band has already endured a late ’90s run with and without drummer Bill Ward, the classic lineup united for a pair of mid-’00s Ozzfests, and they even did recent (uh, court-mandated) run as “Heaven and Hell” where Ozzy was once again replaced by Ronnie James Dio until his death in 2010. The shows will mark the first time the four original members have played together since 2005.

Ozzy Osbourne Reveals He Has Parkinson’s Disease: “I’m No Good With Secrets”