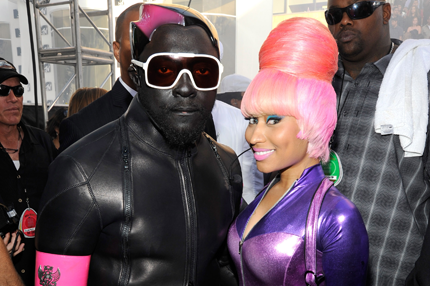 Will.i.am’s next album is named #willpower. With the hashtag. So you won’t forget to get it trending when it comes out in early 2012! The disc’s first single is “T.H.E (The Hardest Ever)” and it features Mick Jagger and Jennifer Lopez (the latter will join Will at the American Music Awards on November 20 to perform the track). This news is, of course, ridiculous. But ridiculousness is a Will.i.am hallmark. It’s why we love him. Sometimes. To wit:

Will.i.am paints himself black for the 2010 Video Music Awards.
In his defense, in the magical, Tron-like futureworld where Will.i.am lives, all the libraries were destroyed, so he has no idea about the horrific tradition of blackface in 19th Century Earth.

Will.i.am appears on CNN’s 2008 election night coverage via hologram.
We will never forget this historic night in history, when the election of the first Black president in American history took a backseat to the “My Humps” guy pretending he’s Princess Leia.

Will.i.am takes a harsh stand against girls with wet sinks and dirty poop-chutes.
This year he sat down with Elle to discuss what he won’t tolerate in a girlfriend, including keeping condoms in the house (“That’s just tacky.”), having a wet sink (“You don’t wipe the sink after you use it? Dry it off!”) and, uh, not properly cleaning their basements: “Here’s proof on why people should have baby wipes. Get some chocolate, wipe it on a wooden floor, and then try to get it up with some dry towels. You’re going to get chocolate in the cracks. That’s why you gotta get them baby wipes.” In other news, will.i.am’s butt is probably cleaner than an emergency room.

Will.i.am poses the theory that CDs were successful because they are round.
He told Rolling Stone:”Every time music was put out on circles, it was successful,” he says. “When records came out. you had 45s, then 33s, then 12-inches — all multiples of three, all circles. As soon as tape decks tame out and there were 8-tracks — square. Didn’t work. A cassette is a rectangle — didn’t work. CD came out — through the roof. The iPods and laptops put music on rectangles — doesn’t work, can’t monetize it. You have to figure out how to make art work in squares.” This is probably good for him since pretty much only squares listen to the Black Eyed Peas.

Will.i.am voices the Pedro, the red-crested Cardinal in the movie Rio.
We mercifully did not see this movie but the Rio wikia page describes his talents as “dancing, singing, flying and rapping.” Just like the real will.i.am, except for the rapping part!

Will.i.am forgets the lyrics to “Don’t Stop The Party” on French TV.
He pulls out his Blackberry to remind himself. In his defense, he did not stop the party.

Will.i.am appears in ridiculous “2 Legit 2 Quit” remake to endorse San Francisco mayoral candiate Ed Lee.
And he won! In his victory speech Ed Lee said, “I never could have accomplished this without Will.i.am debasing himself on the internet.”

Will.i.am promises to tweet while he’s performing at the Super Bowl.
And then he didn’t even come through! “Att crashed…ahhhh!!!! The worse,” he posted once he had cell service again. The worse!