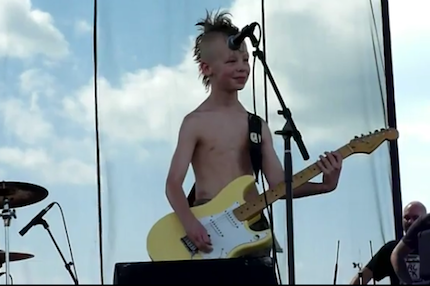 For a long time, pint-size Japanese guitar prodigy Yuto Miyazawa had a lockdown on ZOMG performances of Ozzy Osbourne’s “Crazy Train.” The kid performed on Ellen and even alongside the Prince of Darkness himself at age 10. But now he’s, like, ancient — 11 years old! — and he’s got new competition from 9-year-old Ryan Watson. According to BuzzFeed, young Watson is the frontman and lead guitarist for a band called Unavailable. Gotta say Yuto plays with a bit more style (and he plays the right guitar — the same black-with-white polka-dotted flying-V guitar Randy Rhoads used). But still, Miyazawa: Call your publicist.