When Deadmau5 and Snooki Fight on Twitter, We All Win 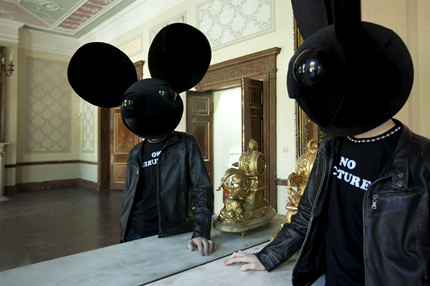 Yesterday two public figures with creatively spelled nicknames squabbled on Twitter for our amusement. After Jersey Shore’s Nicole “Snooki” Polizzi tweeted she’d be watching MTV’s new movie DISconnected — a serious look at the consequences of living online — because “I hate digital drama & abuse,” Deadmau5 fired off a 140-character message at the diminutive reality star reading, “okaaayyy….strange twist of events here… Isn’t your entire career owed to getting punched in the head on TV?”

Well… yes. This is a valid point that probably stung Snooki worse because she is actually quite a Deadmau5 fan. As the Village Voice pointed out last week, the Canadian electro producer is the only artist who gets a shout-out in A Shore Thing, the book Snooki most certainly did not write that still has her name on the cover that came out in January. The passage in question begins with, “A hot guido was staring at her — in a nice way — from across the room” and continues, “Right at that moment, a Deadmau5 mix came on. He was her fave; it was a sign. She stepped onto the dance floor. The music took her over.” In August, Snooki tweeted she was spinning his “Tiny Dancer” with the hashtag #LOVE. The two have met and even posed for photos together before — check out this hilarious shot from a 2010 VMAs event.

That’s likely why Snooki tweeted back at the producer, “yeah it sucked? Since when are you a hater? Idc what you say, ill always love your music.” Deadmau5 failed to reply, but he did note he was feeling a little woozy: ” i haven’t slept in over 30 hours… delirium kicking in a little… i walked by a floating bag of chips and i thought it was a pigeon.”