Eddie Vedder and Co. rocked 'Late Night With Jimmy Fallon' for the last night in a week-long tribute to the English rock giants. 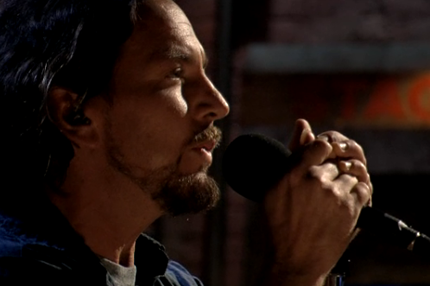 Pink Floyd week on Late Night With Jimmy Fallon came to a rousing conclusion on Friday night with a performance by Pearl Jam. Watch the video below.

Eddie Vedder and Co. played “Mother,” from the 1979 rock opera The Wall. Vedder’s smoky vocal represented the tribute week’s biggest change from the original, as Pearl Jam brought the the song from its wavering acoustic introduction to a grandiose, organ-streaked crescendo.

The show’s tribute to Pink Floyd came as the English rock giants rolled out their massive reissues series. A six-disc box set edition of The Dark Side of the Moon is out now. Deluxe versions of Wish You Were Here (out November 7) and The Wall (February 27, 2012) will follow, along with a best-of collection titled A Foot in the Door (November 7).