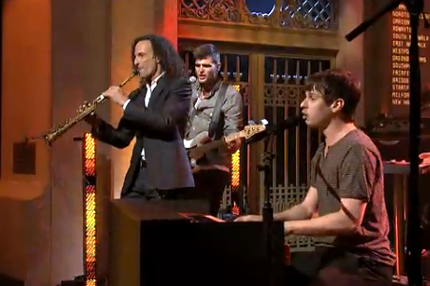 Thank you, Foster the People, for officially ramming the final nail in the semi-ironic saxophone trend on Saturday Night Live this past weekend. For the love of Clarence Clemons, Kenny G’s superfluous guest spot on the Cali band’s “Houdini” should—nay, must—bookend what Lady Gaga began with “The Edge of Glory” last May. Remarkably, Kenny G’s unnecessary doodling wasn’t the most awkward moment of the band’s two performances. That honor is split between frontman Mark Foster’s uncomfortable shuffle and his decision to point directly at the camera during the “coming for you” line at the 1:14 mark of summer smash “Pumped Up Kicks.” That one’s still a killer tune, but this guest appearances was dead before it even started.